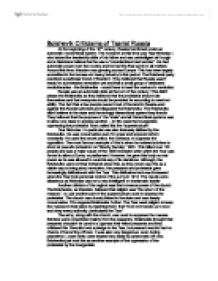 Bolshevik Criticisms of Tsarist Russia At the beginning of the 19th century, Russia functioned under an autocratic monarchical system. The monarch at this time was Tsar Nicholas II, who lacked the leadership skills of his father and was unintelligent although some historians believe that he was a "conscientious hard worker". He had autocratic power over the country and he had the final word on all matters. Around this time, Marxism was growing across Europe. This has been largely accredited to the increase in heavy industry in this period. The Bolshevik party practiced a particular brand of Marxism. They believed that Russia wasn't ready for a proletarian revolution yet and that a small group of dedicated revolutionaries - the Bolsheviks - would have to lead the workers in revolution. Russia was an autocratic state at the turn of the century. This didn't please the Bolsheviks as they believed that the proletariat should rule themselves and that everyone should be provided for according to need not ability. ...read more.

just another part of the superstructure used to oppress the proletariat. The church was closely linked to the state and was deeply conservative. This angered Bolsheviks further. The Tsar used religion to keep the masses in their place by teaching them that "God commands us to love and obey every authority, particularly the Tsar". The army, along with the church, was used to suppress the masses. Soldiers were conscripted mainly from the peasantry. Bolsheviks thought that peasants shouldn't be used to suppress their fellow peasants and they criticised this. Recruits took a pledge to the Tsar, but peasant recruits had no chance of becoming officers. It was also very dangerous, even during peacetime. Lower ranks were treated very badly by aristocratic officers. Bolsheviks just took this as another example of the oppression of the proletariat by the bourgeoisie. Although there was only a very small middle-class in Russia at that time (roughly 2.5% of the population), they were disliked as well. ...read more.

They also opposed World War I. But these were not the main concerns for most of the people. The Bolsheviks believed that they were not politically aware enough to appreciate that their concerns, such as food shortages and poverty, could be directly traced to the hierarchical system in which they lived. Many historians believe that, even at the time of the October Revolution, most peasants were not against the tsar. This is why the Bolsheviks believed that they had to lead the revolution. The Bolsheviks had many criticisms of tsarist Russia, mainly concerned with the structure of society and their involvement in the war. All of these criticisms can be traced back to their belief in Marxism. By understanding the principles of Marxism, such as internationalism, we can understand the rationale behind their criticisms, such as their anti-war stance. However, by studying Marxism, we can see that the Bolsheviks believed in the inevitability of the proletarian revolution. This means that they weren't as concerned as it might be thought about current conditions as they knew that the revolution would happen sometime, it was just a case of when. ...read more.