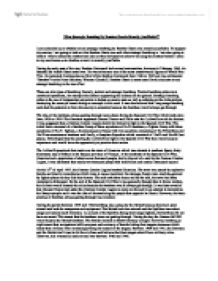 "Was Strategic Bombing By Bomber Harris Morally Justifiable?" I am undecided as to whether or not strategic bombing by Bomber Harris was morally justifiable. To support my answer, I am going to look at who Bomber Harris was and what strategic bombing is. I am also going to look at why he chose this method and also at what he hoped to achieve by using this method before I come to my conclusion as to whether or not it is morally justifiable. During the early part of the war, Bomber Command had several commanders, however in February 1942 Air Marshal Sir Arthur Harris took over. He was to become one of the most controversial figures of World War Two. He remained Commander-in-Chief of the Bomber Command from 1942 to 1945 and was nicknamed "Bomber" by the Prime Minister, Winston Churchill. Bomber Harris is most noted for his decision to use strategic bombing in the war effort. There are two types of bombing. Namely, tactical and strategic bombing. ...read more.

The Luftwaffe practiced their tactics on the town of Guernica which was situated in northern Spain, thirty kilometres east of Bilbao in the Basque province of Vizcaya. At the outbreak of the Spanish Civil War, Guernica had a population of about seven thousand people, but by the end of a raid by the German Condor Legion, it was estimated that nearly two thousand people had been killed and nearly a thousand injured. On the 27th of April 1937, the German Condor Legion bombed Guernica. The town was struck by explosive bombs and then by incendiaries which were to cause maximum fire damage. People were machine-gunned by fighter planes as they fled their homes. The raid took three hours and by the end, the town had been completely obliterated. By the end of the Spanish Civil War it was generally thought that in future warfare, the air force would destroy the cities because the bombers would always get through. It was later revealed that General Franco had asked the German Condor Legion to carry out the raid in an attempt to demoralize the Basque people and it was the idea of demoralizing the people that appealed to Harris. ...read more.

Lauren Edwards 13D As Britain was not prepared for war, it was then decided that Britain's Bomber and Fighter commands would combine to become tactical and support the army. However, Harris did not approve and said that he would bomb Berlin to keep the Bomber Command separate. There was then a massive increase in the bomber force and a new aircraft was introduced. The Lancaster was a four-engined, heavy bomber and was a long range aircraft. It was this aircraft that Harris would use in his raid. In 1943, Bomber Harris announces a 1000 Bomber Raid. Knowing that the bombers were not getting through, he decides to attempt to overwhelm the Germans by sending in one thousand bombers in at once thinking that at least some will get through. As the British were flying at night, Harris came up with Night Area Bombing and his justification was that if enough civilians were bombed then they would give up because their morale would have been destroyed. In conclusion, I don't think that strategic bombing by Bomber Harris was morally justifiable. Although it's inevitable that there will be casualties during wars, it is inhumane and inexcusable to deliberately attack civilians in order gain supremacy over the enemy. ...read more.