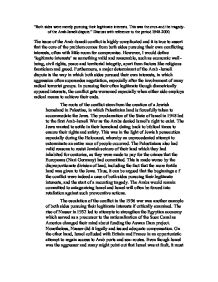 Both sides were merely pursuing their legitimate interests. This was the crux-and the tragedy-of the Arab-Israeli dispute. Discuss with reference to the period 1948-2000.

The issue of the Arab-Israeli conflict is highly complicated and it is true to assert that the core of the problem comes from both sides pursuing their own conflicting interests, often with little room for compromise. However, I would define 'legitimate interests' as something valid and reasonable, such as economic well-being, civil rights, peace and territorial integrity, apart from factors like religious fanaticism and greed. Furthermore, a major determinant of the Arab-Israeli dispute is the way in which both sides pursued their own interests, in which aggression often supersedes negotiation, especially after the involvement of many radical terrorist groups. In pursuing their often legitimate though diametrically opposed interests, the conflict gets worsened especially when either side employs radical means to achieve their ends. The roots of the conflict stem from the creation of a Jewish homeland in Palestine, in which Palestinian land is forcefully taken to accommodate the Jews. The proclamation of the State of Israel in 1948 led to the first Arab-Israeli War as the Arabs denied Israel's right to exist. The Jews wanted to settle in their homeland dating back to biblical times to ensure their rights and safety. This was in the light of Jewish persecution especially during the Holocaust, whereby an unprecedented attempt to exterminate an entire race of people occurred. ...read more.

It can again be viewed as legitimate if we consider the Arabs desire to eradicate Israel as reasonable in the first instance, and this is complicated by Israeli seizure of Arab territory after the 1967 war. Both sides being committed to enhance warfare capabilities saw them drawing closer into the Cold War orbit by seeking a superpower patron. The Soviet military aid received by the Egyptians and Syrians granted them to the opportunity to besiege Israel which eventually led to a legitimate Israeli reprisal. Both sides acting in their own varying legitimate interests made the search for permanent peace a gargantuan task in the Arab-Israeli dispute. The search for peace was complicated by several factors, involving hard-line personalities, mutual distrust, forceful reprisals, non-state actors which included radical militant groups, disagreements over extent of compromise and the disunity of the Arabs. Herein lies the paradox between how there can be no peace without security and how there can be no security without peace. Though it can be pointed out that the religious fervour exhibited by certain Islamic terrorist groups such as Hamas and Hezbollah and their declaration of Holy War against Israel might not actually be considered legitimate, since it is not entirely driven by practical considerations but religious fanaticism. ...read more.

The situation worsened in 1995 when non-state actors such as Islamic militants and Hezbollah antagonised Israel resulting in the operation 'Grapes of Wrath' directed at Hezbollah in Lebanon. Furthermore, when Netanyahu obtained power after the Peres debacle, there was another step back from peace as the hard-line politician hardened Israeli attitudes towards Palestine, resulting in Arab alarm. These illustrates the dynamics between Arab-Israeli relations even though the basic premise, that of both sides pursuing their own legitimate interests (perhaps excluding Islamic radicalism) remain mostly unchanged. In conclusion, it is true to a large extent that both sides were merely pursuing their own legitimate interests, and this forms the crux of the entire conflict. However, the way in which they proceed to do so, with the resoluteness of their stand and readiness to adopt violence to achieve their objectives, the conflict between them is made far more intractable. Certain conditions such as Cold War geopolitics also arguably worsened the situation. The improbability of both sides in reaching a full compromise due to different beliefs, pride and sustenance issues is why this entire situation is aptly termed a tragedy. "Both sides were merely pursuing their legitimate interests. This was the crux-and the tragedy-of the Arab-Israeli dispute." Discuss with reference to the period 1948-2000. ...read more.