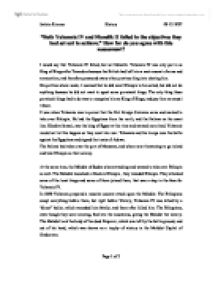 &quot;Both Yohannis IV and Menelik II failed in the objectives they had set out to achieve.&quot; How far do you agree with this assessment?

"Both Yohannis IV and Menelik II failed in the objectives they had set out to achieve." How far do you agree with this assessment? I would say that Yohannis IV failed, but not Menelik. Yohannis IV was only put in as King of Kings after Tewodros because the British had left him a vast arsenal of arms and ammunition, and therefore pressured every other province king into electing him. His politics where weak, it seemed that he did want Ethiopia to be united, but did not do anything because he did not want to upset some provincial kings. The only thing these provincial kings had to do was to recognize him as King of Kings, and pay him an annual tribute. It was when Yohannis was in power that the first foreign Colonies came and wanted to take over Ethiopia. ...read more.

The Ethiopians, even though they were winning, fled into the mountains, giving the Mahdist the victory. The Mahdist took the body of the dead Emperor, which was left by the battle ground, and cut of his head, which was shown as a trophy of victory in the Mahdist Capital of Omdurman. Now Emperor Menelik II was an emperor that did everything for his country and his country men. The Italians were eager to find Menelik to make him join them, and help them bring down Emperor Yohannis IV. They gave Menelik large amounts of fire arms and ammunition, other arms came from the French which had given him access to loans from the French banks. He was now the strongest provincial king in Ethiopia, and when Emperor Yohannis IV was killed, he was automatically crowned Negus Negast (king of Kings). ...read more.

Menelik marched north with his army against the Italians, they went into Eritrea. The Italians believed in themselves, they thought they had supreme fire power and thought they could do as Gen. Napier had done, and go all the way into Magdala, But they were wrong. The Italians where over runned by the massive Ethiopian army, that was the biggest European defeat in history in Africa. The battle of Adowa was a complete Ethiopian Victory. Italians where forced to face defeat and leave Eritrea and Ethiopia. Menelik created the New Ethiopia, with the loans from the French Banks, he made schools, a hospital, etc. He reunited Ethiopia under one, and even until now, He is know as the king who took Ethiopia into the modern world. ?? ?? ?? ?? Joakim Rimmer History 08-12-2007 Page 1 of 2 ...read more.