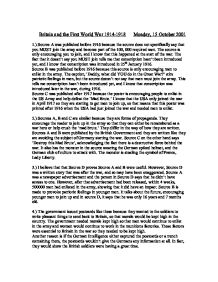 Britain and the First World War 1914-1918 Monday, 15 October 2001 1.) Source A was published before 1916 because the source does not specifically say that you MUST join the army and become part of the 100, 000 required men. The source is only encouraging you to join, and I know that this happened at the start of the war. The fact that it doesn't say you MUST join tells me that conscription hasn't been introduced yet, and I know that conscription was introduced in 25th January 1916. Source B was published before 1916 because this source is only encouraging men to enlist in the army. The caption,' Daddy, what did YOU do in the Great War?' stirs patriotic feelings in men, but the source doesn't not say that men must join the army. This tells me conscription hasn't been introduced yet, and I know that conscription was introduced later in the war, during 1916. Source C was published after 1917 because the poster is encouraging people to enlist in the US Army and help defeat the 'Mad Brute.' I know that the USA only joined the war in April 1917 so they are starting to get men to join up, so that means that this poster was printed after 1916 when the USA had just joined the war and needed men to enlist. ...read more.

Also he would have been sniped, by standing up like that. One of the privates also has a moustache, but this is inaccurate because privates weren't allowed to have facial hair in the army. They are also wearing the wrong hats (dress uniform) when they should be wearing helmets. Source G is propaganda because it gives the impression that if you buy the cigarettes, you will be helping the war effort. 6.) Sources H, J and I may differ because they were different accounts by different people. Source H is by Sir Douglas Haig. He would've been biased because he was leading the war and so wanted to make it seem that they would win. Also, he was away from the front lines, so he wouldn't have known what was really going on, and how the men were really feeling. He also may have been given information that was wrong. In the source it says that 'the wire has never been so well cut.' It may have well cut in some places but in most places it wasn't. Source I is from an experienced solider, George Coppard. He would've been up on the front lines and have seen the battle first-hand. Also, his account is a part from the story, 'With a Machine Gun to Cambrai.' It was written after the war as a story so he might have exaggerated some details. ...read more.

They thought it'd be an easy war and be over in a few months. Source G agrees because the man is standing up. Normally, soldiers didn't do this because you'd get shot at. The source is trying to make soldiers in the war look proud and heroic. The source is also propaganda because it's trying to sell cigarettes. It gives the impression that if you buy the cigarettes, you'll be helping Britain out in the war. Source J agrees because it is propaganda. The photo was taken with the intention of letting people know that British soldiers captured Germans. The DORA Act of 1914, allowed the Government to control what the public were shown and this is exactly what they would show the public. Source K disagrees because it provides a fair view on what trench conditions were like. Often, it was boring with nothing to do, as shown by Source K where they sit around and sing poems to each other. In conclusion, I'd agree up to a certain extent. On the one hand, the military and civil authorities did mislead people. Most of them thought it was going to be an easy war and be over quickly. None of them knew it'd last for 4 years and kill millions of people. However, the military and civil authorities did try and provide a suitable view on trench life. They made the Battle of Somme film to show the public what life was like, and that was realistic. ...read more.