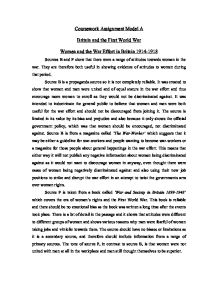 Britain and the First World War - Women and the War Effort in Britain 1914-1918 - Source based questions.

Coursework Assignment Model A Britain and the First World War Women and the War Effort in Britain 1914-1918 Sources B and F show that there were a range of attitudes towards women in the war. They are therefore both useful in showing evidence of attitudes to women during that period. Source B is a propaganda source so it is not completely reliable. It was created to show that women and men were united and of equal stature in the war effort and thus encourage more women to enroll as they would not be discriminated against. It was intended to indoctrinate the general public to believe that women and men were both useful for the war effort and should not be discouraged from joining it. The source is limited in its value by its bias and prejudice and also because it only shows the official government policy, which was that women should be encouraged, not discriminated against. Source B is from a magazine called 'The War-Worker' which suggests that it may be either a guideline for war-workers and people wanting to become war-workers or a magazine for those people about general happenings in the war effort. ...read more.

It is a good assessment for the level it is intended for but does not go into much detail and only states what gains women made, rather then explain what the terms were and who the more important individuals were in the women's rights campaign for example. This may also be because the book is about the First World War generally and not specifically about the gains women made in and after the war. The biggest flaw in the source, though, is its failure to recognize that there were many problems with women workers in the First World War and how there were many people who thought that women were not up to the job and caused friction. Source I seems to suggest that there were few problems and that women didn't have to struggle for the vote after the war. There were also those in the suffragette movement who disagreed with the armistice with the government and saw it as a betrayal. Whilst Emmeline Pankhurst declared, 'What would be the good of a vote without a country to vote in!'... Her opposition, for example Sylvia Pankhurst Hannah Mitchell, felt betrayed. Source I does not address this factor at all. ...read more.

Source F is from a book about society in Britain which includes this period of time and is a reliable source. It states that some women were, "...restricted to less-skilled operations and were the victims of hostility and even sabotage." This shows that the attitudes of many men were unchanged. It does say though that some women did have the full co-operation of male employees. Source F suggests that women had not taken a huge step forward as some of the sources suggest and had invited hostility from men due to being cheap and undermining traditional male roles. Source G shows that women doctors were treated as inferior to men and were not given the rank of officer, even though it may have been in Britain's best interest to do so. Winston Churchill claimed it was because there were duties which they were incapable of undertaking. These sources suggest that women did not enhance their position in society despite whether they deserved to or not. In reality women were given the vote after the war and were eventually given the vote at the same age as men but were not treated as equals to men. The stand women made was greatly admired and led to support from men as well as women but they were continually treated as inferior and even now some signs of this are seen. ...read more.