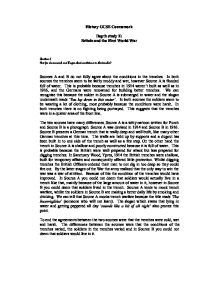 Britain and the First World War

History GCSE Coursework Depth study E: Britain and the First World War Question 1 How far do sources A and B agree about conditions in the trenches? Sources A and B do not fully agree about the conditions in the trenches. In both sources the trenches seem to be fairly muddy and wet, however Source A is flooded full of water. This is probable because trenches in 1914 weren't built as well as in 1916, and the Germans were renowned for building better trenches. We can recognise this because the solder in Source A is submerged in water and the slogan underneath reads 'You lay down in this water'. In both sources the soldiers seem to be wearing a lot of clothing, most probably because the conditions were harsh. In both trenches there is no fighting being portrayed. This suggests that the trenches were in a quieter area of the front line. The two sources have many differences. Source A is a witty cartoon written for Punch and Source B is a photograph. Source A was devised in 1914 and Source B in 1916. Source B presents a German trench that is really deep and well built, like many other German trenches at this time. The walls are held up by supports and a dugout has been built in to one side of the trench as well as a fire step. On the other hand the trench in Source A is shallow and poorly constructed because it is full of water. This is probable because the British were well prepared for attack but less prepared for digging trenches. In Sanctuary Wood, Ypres, 1914 the British trenches were shallow, built for temporary affairs and consequently offered little protection. Whilst digging trenches the British Officers ordered their men to not dig in too deep so they could fire out. By the latter stages of the War the army realised that the only way to win the war was a war of attrition. ...read more.

This shows he was highly respected and trusted by many people, and consequently we could say this resource is to be trusted. Question 5 How useful are sources G and H as evidence of war on the Western Front? To test how useful sources G and H are I shall work out the strengths and limitations of each source. I will also look to see if the source tells us something new which we don't know. I will analyse the sources G and H against other sources and my own knowledge. John Terraine who wrote source G was a military historian. Because of this he would have had a lot of knowledge about the war. Terraine wrote in hindsight and consequently had a wider and fuller range of information than the people who wrote in the progressing war. In the Trenches there were many forms of communication. Trench warfare used runners, pigeons and telegrams. This communication was not as efficient and quick as walkie - talkies. Consequently Terraines theory could be correct in the fact that war lasted so long. Messages occasionally did get back to the headquarters but holy for the worst. On average it took 8-10 hours for a message to travel. The limitations of Source G are that Terraine is British, and for this reason he might have been bias towards the Allied Forces. Many forms of communication would not have been efficient enough when the men entered no mans land. Walkie - talkies are more useful in mobile war rather than trench warfare, therefore Terraines theory could be incorrect. In source G, Terraine says the reason why trench warfare lasted so long was because the 'walkie - talkie...did not exist'. This statement should not be put down as the single cause why the war lasted so long. During the war the technology was available but it was not practical enough for a battlefield. ...read more.

The Central Powers were unable to strengthen any further and the Allies continued to attempt mass breakthrough. Eventually in 1918 when the German economy was in disrepair after the war effort this was achieved. One major reason for why the Central Powers lost was because the USA joined the war, though it could be argued they just replaced the Russians. Another reason for why the Allies eventually won is because they had the greatest Empire. Britain had a larger Empire than Germany. Britain was richer and had more raw supplies, Britain was also able to call on the help of its Commonwealth troops. In a war of attrition the Allies had greater amounts of soldiers and supplies and would be able to last the longer distance. Other reasons for why the War on the Western Front lasted for so long are that both sides did not use their navy to its full capabilities. Both sides amassed huge navies during the arms race but were reluctant to use them much for fear of destruction or damage. The War on the Eastern Front was also a failure. If it was successful then the Central Powers would have been stretched to fight a war on two fronts, and soldiers would have been brought out of the Western Front to fight in the Eastern Front. This meant the war in the Western Front should have ended more quickly. But failures like the Gallipoli campaign in 1918 caused tremendous losses and did not bring about the end of the fighting at the present level in the Western Front. It has been strongly argued that the reason why the War on the Western Front continued for so long was because of the naivety of both sets of Generals. The Generals sent soldiers over the top to face machine guns which were capable of firing six hundred rounds per minute. Poor conditions on the battlefield, inadequate communication and absences of important inventions until the latter stages can also be blamed. ...read more.