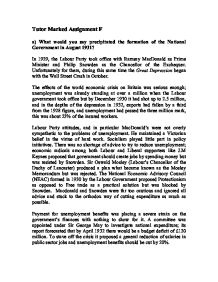 Britain between the wars

Tutor Marked Assignment F a) What would you say precipitated the formation of the National Government in August 1931? In 1929, the Labour Party took office with Ramsay MacDonald as Prime Minister and Philip Snowden as the Chancellor of the Exchequer. Unfortunately for them, during this same time the Great Depression began with the Wall Street Crash in October. The effects of the world economic crisis on Britain was serious enough; unemployment was already standing at over a million when the Labour government took office but by December 1930 it had shot up to 2.5 million, and in the depths of the depression in 1932, exports had fallen by a third from the 1928 figure, and unemployment had passed the three million mark, this was about 23% of the insured workers. Labour Party attitudes, and in particular MacDonald's were not overly sympathetic to the problems of unemployment. He maintained a Victorian belief in the virtue of hard work. Socialism played little part in policy initiatives. There was no shortage of advice to try to reduce unemployment; economic radicals among both Labour and Liberal supporters like J.M Keynes proposed that government should create jobs by spending money but was resisted by Snowden. Sir Oswald Mosley (Labour's Chancellor of the Duchy of Lancaster) produced a plan what became known as the Mosley Memorandum but was rejected. ...read more.

The grass roots Labour share a more sympathetic view towards the unemployed and supported the Strike. MacDonald however did not see the political benefit of an essentially trade union struggle- he was afraid of losing party votes. Trade Unionist complained that the Labour party had failed to support the strike. This will not be first time where MacDonald appeared to be supporting the Conservatives. There was a crucial dispute between the Labour Government and the Trade Unions at this time. This friction between the Trade unionist and the Labour party was repaired only because of the Conservatives political error in issuing The Trade Disputes Act 1927. Sympathetic strikes and intimidation were illegal and union funds could be seized during a dispute through this Act. Trade union members were not required to contribute to the union's political fund (the political levy paid to the Labour Party) unless they choose to do so by "contracting-in" instead of the usual "contracting-out". The new act placed the responsibility on the member and many did not bother to contract-in causing a fall of over 25% of the Labour party's income. This united the Unions, the Labour party and the people against the Conservatives resulting in the 1929 victory for Labour. However, MacDonald had a tendency to drift from the grass root Labour ideas and cause a division within the party. ...read more.

MacDonald was expelled from the part for openly ignoring party discipline and forming a government that was anti-socialist and which might pass anti-working class legislation. The majority of the Labour party was furious with MacDonald; they condemned him as a traitor to the Labour movement and expelled him from the party. They accused him of being vain, ambitious and out of touch with the grass roots of the party, and claimed that he was planning to ditch them for a long time, so that he could remain in power. There is no solid evidence to support this view; his biographer, David Marquand, believes that George V and Baldwin persuaded MacDonald to stay on as Prime Minister of an all-party government as the best way of restoring confidence and avoiding General Election. Robert Skidelsky suggests that MacDonald's real betrayal of the party occurred not in August 1931, but in the earlier part of his government, when he ignored advice and failed to take actions which might have avoided the crisis in 1931. More recently, Philip Williamson has put forward a slightly different interpretation: he suggests that Neville Chamberlain proposed a National Government in preference to a Conservative government, because "this would shield their party from the electorally damaging accusations that it was a rich man's party cutting the incomes of the poor". Unemployment is not the immediate contributor to this political upheaval, it had more to do with differences of opinion, and an orthodox believe system that was too cautious to make changes. ...read more.