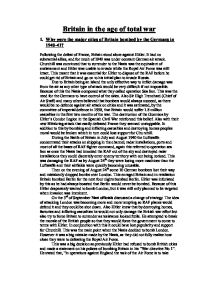 Britain in the age of total war. Why were the major cities of Britain bombed by the Germans in 1940-41?

Britain in the age of total war 1. Why were the major cities of Britain bombed by the Germans in 1940-41? Following the defeat of France, Britain stood alone against Hitler. It had no substantial allies, and for much of 1940 was under constant German air attack. Churchill was convinced that to surrender to the Nazis was the equivalent of enslavement and Hitler was unable to invade while the Royal Air Force was still intact. This meant that it was essential for Hitler to dispose of the RAF before he could get rid of Britain and go on to his initial plan to invade Russia. Due to Britain being an island the only effective way to inflict damage was from the air as any other type of attack would be very difficult if not impossible. Because of this the Nazis composed what they called operation Sea lion. This was the need for the Germans to have control of the skies. Also Sir High Trenchard (Chief of Air Staff) and many others believed that bombers would always succeed, as there would be no defence against air attack on cities and it was estimated, by the committee of imperial defence in 1938, that Britain would suffer 1.8 million casualties in the first two months of the war. The destruction of the Guernica by Hitler's Condor Legion in the Spanish Civil War reinforced this belief. Also with their new Blitzkrieg attack that easily defeated France they seemed unstoppable. In addition to this by bombing and inflicting casualties and destroying homes peoples moral would be broken which in turn could lose support for Churchill. During the Battle of Britain in July and August 1940 the Luftwaffe concentrated their attacks on shipping in the channel, radar installations, ports and most of all the bases of RAF fighter command, again this referred to operation sea lion as once the Nazis had knocked the RAF out of the sky and destroyed radar installations they could discretely enter enemy territory with out being noticed. ...read more.

However, this was not all good as many people found this extremely boring so this had an effect on people's morale. Both rationing and evacuations affected women much more that men as the women had to cope with them and it was the women who had to try to come up with imaginative ways of cooking with the same limited foods to try and restore some morale. During the Blitz the role of women changed and they flooded into the work force as many men were out fighting, and for the first time women were permitted into pubs on their own. Also some women did voluntary work mainly for the ARP.[JA1] It was also rumoured that the Germans targeted women and when they were bombing they mainly wanted to hit the women because it was easily seen (Winston Churchill even made a speech about it) that the housewives of Britain kept the morale up and enabled the country to survive Hitler's attempts to force Britain to surrender. In addition to this with the women being housewives, keeping a job and perhaps doing voluntary work would have been a tremendous strain and would have been exhausted. Many things that people would have taken for granted would have maybe been disturbed due to the bombing. Water and gas pipes could be damaged leading to people not being able to wash their things e.g. clothes, dishes and themselves and not being able to cook meals or warm their house. Also without electricity they would also be without their radio (the wireless), which was there, main source of input in the countries war effort and was also a type of entertainment. With the wireless out of use people would go father a field to cure their boredom but for precautions the government shut down most types of entertainment as they could be exploited by Germany. For example beaches were mined and bared wire was put around them. ...read more.

Although radio and cinema played an important role many other types of entertainment also played important roles. Comedians like ITMA (It's that man again) and many singers were very important and made their reputations during the war. For example singer, Vera Lynn, who went out and sang to soldiers in the Army, Navy and Air Force was known as the "Forces sweetheart". Also classical music's popularity rose during the war and people gathered to listen to concerts by Dame Myra Hess, a famous pianist. The BBC was the government's main way of maintain morale and also provided the means of communicating with the people who occupied Europe. Because of the war the BBC changed and by the end of the war it was a national institute. The Prime minister during the war was Winston Churchill. His forceful and personality made it easy to believe him. He was very talented at writing and delivering heroic speeches, which were broadcasted on the BBC to help increase peoples enthusiasm and determination to win the war. Churchill had some very important ideas that helped keep up people's morale. Two of his most important ideas that Churchill had were "all in it together" and "total war". "Total war" meant that every person in the country was playing an active part in the war. It wasn't all down to the government and the armed forces. Putting up with and living with the rationing and the blackouts was a way for everyone to help. Also Churchill wanted people to feel that everyone was "all in it together". This had a powerful effect on people as they felt they were making a valuable contribution to the war effort no matter what they were doing. The government's efforts of propaganda and censorship show how they controlled information and turn horrific events into things to be proud of. This kept the morale of the people high and may have been one of the things that help the war effort, which lead Britain to victory in the war. [JA1] ...read more.