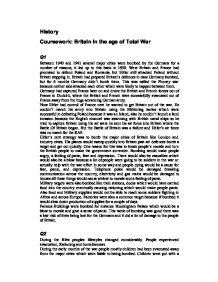 Britain in the age of Total War

History Coursework: Britain in the age of Total War Q1 Between 1940 and 1941 several major cities were bombed by the Germans for a number of reasons, it led up to this back in 1938. Were Britain and France had promised to defend Poland and Romania, but Hitler still attacked Poland without Britain stepping in. Britain had prepared Britain's defences in case Germany bombed, but for 6 months Germany didn't bomb them. This was called the Phoney war because neither side attacked each other which were likely to happen between them. Germany had captured France later on and drove the British and French forces out of France in Dunkirk, where the British and French were successfully evacuated out of France away from the huge advancing German army. Now Hitler had control of France next he wanted to get Britain out of the war. He couldn't march his army into Britain using the Blitzkrieg tactics which were successful in defeating Poland because it was an Island, also he couldn't launch a land invasion because the English channel was swarming with British naval ships so he tried to capture Britain using the air were he sent his air force into Britain where the Battle Of Britain began. ...read more.

rice. Other than food other things were in short supply. Coal which was in short supply had to be rationed also so in baths tubs only a certain amount of water was allowed to be used because coal was used to heat the water. People were encouraged to grow crops in their back gardens for more food. Rationing was made worse for smaller families than larger ones because there were fewer ration books to enable them to get food. Soap couldn't be wasted so people were advised to look after soaps so they would last longer. Because of rationing peoples health gradually got better because there were less fatty foods available. Poor Peoples life styles actually got better there was more food for them because of the rationing and the wages went up. Rationing though caused a black market to flourish where rich people could buy as much food as they wanted for a higher price. Fuel supply went down and prices went up so people ended up not using their car all through the War. All through the war people saw people die, houses destroyed people becoming homeless. ...read more.

Entertainment was used to get people to forget about the war, even the army were entertained by stage stars e.g. Vera Lynn who sang to them. Great film, radio and stage stars boosted the morale of the British people. Films were used to make people continue the fight and comedy programmes were made to make fun at Hitler, the Germans and the British, to boost morale. The government used propaganda e.g. Posters which were used to encourage people to conserve food, fuel and to beware of enemy spies to help the war effort. Film posters showed films related to the war to boost morale, to send a paratactic message, even newsreels before a film boosted morale. Winston Churchill was regarded as a great wartime leader however newspapers, newsreels and the BBC reported him as an almost legendary figure. Winston Churchill made heroic speeches to stir up people's enthusiasm and determination to win the war. To find out what morale was like out in Britain the government observed peoples conversations in bars, shops, post offices and other public places and then writing a report of what they heard people say. These reports were analysed by the government to suggest the morale of people and what methods to maintain it. ...read more.