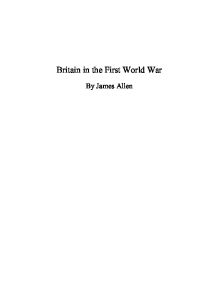 Britain in the First World War

Britain in the First World War By James Allen Britain in World War One Contents Introduction Page 3 Recruitment Page 3-4 Conscription Page 4 Propaganda Page 4-5 Bombing of Civilians Page 5 The Role of Women Page 5-6 Defense Of the Realm Act Page 6-7 Rationing Page 7 Attitudes Before, During and After WW1 Page 7-8 Introduction Recruitment and conscription had become a big issue at the beginning and propaganda was used to change the attitudes of the public. After the First World War, life in Britain had changed dramatically. Britain owed nearly six billion pounds to the Americans. Air raids back on the British homeland had killed over one thousand people and left millions homeless. In total nearly one million British people had died during the war. Women had come to do the jobs of men, and governments had taken new measures to ensure we had won this new kind of war. The League of Nations had been intended to bring peace back to Europe and the world but only brought more bitterness. Recruitment Before conscription, men would be encouraged by their families to enlist and fight for the country. Propaganda was used to stir up the ideas and emotions of what kizer whilhelm had in mind for Europe and to bring out countrymen's patriotic duties. ...read more.

The Germans then developed the Zeppelin airship. These were blimps filled with hydrogen so if they were ever shot down they would always explode leaving the crew no chance of surviving. The first attack killed two people and damaged properties. Balloons were then used to stop attacks made by these airships. The roll of women Before the First World War women were never thought to be considered equals, but women were to play a vital role of the war. Women would encourage the men to fight at the beginning but were later filling in the jobs left vacant by them. This meant that women were doing work they had never done before. They became firefighters, window cleaners, postmen and done much heavier work then before. Although they were receiving lower pay then men they were proving that they could do the job just as good or even better in some jobs then men. When the government asked women to join the Women's Land Army, which kept the country supplied with food, over 150 000 women responded. Over 20 000 had started working as nurses and 15 000 volunteered for the Voluntary Aid Detachments (VAD). These worked behind the lines on the western front helping wounded soldiers. Defense Of the Realm Act This was introduced to the British government during mid 1914. This gave the government far more power than it had previously. ...read more.

The BEF had only 100 000 men and when most were killed the government started a campaign targeting British patriotic duties and many men joined. Many were enthusiastic and hoped they would fight before the war ended. Many of the soldiers wrote poems and kept diaries of feeling and what many of them had come to experience. At the start they were happy to go and fight but after a few weeks men 'couldn't wait to die'. After the war Frances attitude towards Germany was revenge, revenge for A&L, loss of life and damage caused. They wanted to make sure that this could never happen again. America on the other hand wanted to keep Germany from being punished too much incase any thing like this happen again. Britain was in the middle of all this. They understood were both nations were coming from. They agreed on the punishment and forced Germany to sign the treaty of Versailles. The British blockade had starved the Germans into surrendering. The German public had nicknamed the government the 'November Criminals'. The League of Nations had been created by woodrow Wilson but when he backed out, the league was left with no real power. The permanent members were still recovering after war. The league had more defeats then victories and rarely brought peace to rising conflicts. The American public had felt they should never have gotten involved with European affairs. ?? ?? ?? ?? 2 2 ...read more.