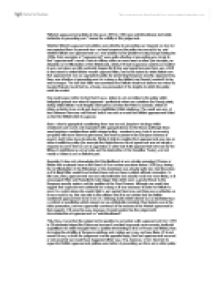 &quot;Britain's appeasement policies in the years 1933 to 1939 were well-intentioned, but totally ineffective in preventing war.&quot; Assess the validity of this judgement.

"Britain's appeasement policies in the years 1933 to 1939 were well-intentioned, but totally ineffective in preventing war." Assess the validity of this judgement. Whether Britain's appeasement policies were effective in preventing war depends on how far one expected them to prevent war - on how temporary the policy was meant to be, and whether Britain saw appeasement as a real solution to the problems facing Europe during the 1930s. Early examples of "appeasement" were quite effective at preventing war, simply in that "appeasement" meant a lack of military action on some issue or other (for example, on Abyssinia or remilitarisation of the Rhineland), which, if it had happened, could have resulted in war; and when war did eventually happen its timing was largely because there was a limit to the extent to which Britain -would- appease Hitler, and to the extent to which Britain saw that appeasement was an appropriate policy for preserving European security. Appeasement, then, was effective at preventing war for as long as the British (and French) ...read more.

to some German act of aggression or other but it did appease their demand for the lifting of restrictions on armaments and the destruction of the Versailles Treaty), and not merely a failure to act on Britain's part. Secondly, it does not acknowledge that the likelihood of war actually occurring if France or Britain had employed force or the threat of it on various occasions before 1939 (e.g. during the remilitarisation of the Rhineland, or the Anschluss) was actually quite low. Had they done so it is likely Hitler would have backed down and war been avoided without concession. In this case, then, appeasement was not only ineffective but actually made war more likely, as it encouraged Hitler and Mussolini to take bigger risks which were a greater threat to the European security system and the position of the Great Powers. Although one could also suggest that appeasement continued for as long as it was necessary in order for Britain to rearm to a point where she -could- fight a war against Germany, and thus was as effective as it was meant to be, this also falls to ...read more.

Thus, that appeasement was ineffective in preventing war is true, because cumulatively it increased its likelihood. While it is possible to posit that appeasement was an effective policy insofar as it prevented war -up to- 1939, such an argument does not stand when one considers whether war was altogether very likely before 1939: neither Britain nor France (nor Germany) had rearmed satisfactorily before then, and none of the instances or developments of appeasement presented themselves as occasions to go to war over before possibly the Sudeten crisis (particularly not to a Europe anxious to avoid that very eventuality.). The point that the instigation of war by the British and French was the result of a -lack- of acquiescence to German aggression and the decision -not- to appease (implying that appeasement -was-, in its way, effective) is valid, but it is open to question as to how politically (Britain had guaranteed Poland), economically (Britain had been warned that sustaining armaments for much longer than 1939 was economically dangerous) -possible- it was to -not- declare war at that point. (One may also say that an invasion, even if endorsed by the agreement of some outside parties, is still an invasion.) ...read more.