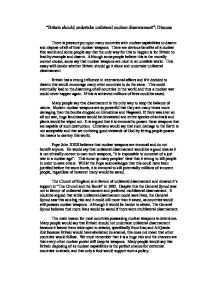 "Britain should undertake unilateral nuclear disarmament": Discuss There is pressure put upon many countries with nuclear capabilities to disarm and dispose of all of their nuclear weapons. There are obvious benefits of a nuclear free world and some people say that the only way for this to happen is for Britain to lead by example and disarm. Although some people believe this is the morally correct choice, some say that nuclear weapons are must in an unstable world. This essay will decide whether Britain should go it alone and undertake unilateral disarmament. Britain has a strong influence in international affairs and if it decided to disarm this would encourage many other countries to do the same. This could eventually lead to the disarming of all countries in the world and thus a nuclear war could never happen again. If this is achieved millions of lives could be saved. ...read more.

There are many parts of the Bible that are in support of peace, "Mighty God, Eternal Father, Prince of peace" (Isaiah 9:6), "Blessed are the peacemakers for they shall be called Sons of God". Although these authors clearly favour peace, it is hard to say if they would want Britain to undertake a policy of isolation. It is down to a matter of opinion as to whether Britain following a policy of unilateral disarmament is in the best interests of peace. Personally, I believe that unilateral nuclear disarmament is very foolish and that it will do more harm than good. Although it works in theory, it is idealistic and in reality it is potentially catastrophic. We would be vulnerable to attacks and if we were attacked, the government would retaliate by sending in troops or warplanes. This would inevitably result in hundreds of thousands of deaths- possibly on both sides. The fact is that we need nuclear weapons to deter other unstable countries from taking advantage of us and other countries without nuclear capabilities. Ultimately, these deterrents save lives. ...read more.