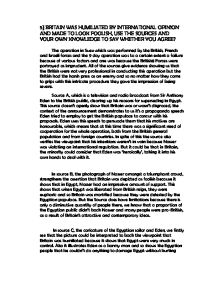 Britain was humiliated by international opion and made to look foolish, use the sources and your own knowledge to say whether you agree?

5] BRITAIN WAS HUMILIATED BY INTERNATIONAL OPINION AND MADE TO LOOK FOOLISH, USE THE SOURCES AND YOUR OWN KNOWLEDGE TO SAY WHETHER YOU AGREE? The operation in Suez which was performed by the British, French and Israeli forces and the 9 day operation was to a certain extent a failure because of various factors and one was because the British8 Forces were portrayed as imprudent. All of the sources give evidence showing us that the British were not very professional in conducting this operation but the British had the harsh press as an enemy and so no matter how they come to grips with this intricate procedure they gave the impression of being severe. Source A, which is a television and radio broadcast from Sir Anthony Eden to the British public, clearing up his reasons for superseding in Egypt. This source doesn't openly show that Britain was or wasn't disgraced, the context of the announcement demonstrates to us it's a propaganda speech Eden tried to employ to get the British populace to concur with his proposals. Eden uses this speech to persuade them that his motives are honourable, which means that at this time there was a significant need of cooperation for the whole operation, both from the British general population and from foreign countries. ...read more.

This demonstrates that Britain was relying a great deal on a propaganda campaign to indoctrinate the minds of the naive and ignorant of the populace and make them agree with his methods. In source E which is a photograph of a rally held in London, shows that Britain was greatly humiliated by the events of the Suez Crisis. It shows that the British public were furious at Eden's selection about action over the Suez but now the British populace was made to look foolish because of there governments actions in the eyes of international opinion. But it only shows a small portion of the British public and also only shows the belief of the British public and not of the other countries. Source F, which is a letter from a member of the British public to the Daily Mirror, agrees with the assertion that Britain was portrayed as foolish to a degree. It states that 'military action against Egypt is quite immoral', which is true to an extent. So therefore because Britain used military conflict in Suez it demonstrated to the world that they were dissipated. Alternatively, the opinion is morally correct and righteous because Nasser's actions and techniques were comparable to that of a dictator. ...read more.

Britain was embarrassed, by the fact that her main ally, America did not support her in the Suez War and as a result of Eisenhower's decision, America kept their respect. This also commenced the end of the British Empire and Britain became a puppet of the USA. The Suez Crisis was such a failure, that after Britain left, the pound collapsed in value and as a result of these vast mortifications, Eden fell into ill health and resigned as Prime Minister and the party's public support declined immensely. On the other hand, Britain believed that the operation in the Suez was a honest campaign because they saw Nasser as a menace not only to Egypt but to the whole world as well. Nasser had breached an international law by nationalising the Suez Canal and Britain believed that something must be done about it and also they believed that it was right to use military action in the Middle East because they wanted to eradicate what could potentially be, a merciless dictator. Obviously Britain made some huge mistakes in their planning of the operation in certain aspects, such as public support and international support but we can also see that most of their motives were well-intended and that maybe the Suez was good for Britain because they didn't go out without a fight. ...read more.