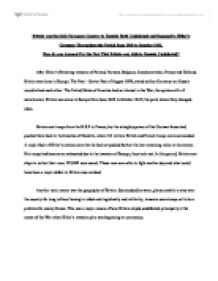 Britain was the Only European Country to Remain Both Undefeated and Opposed to Hitler's Germany Throughout the Period June 1940 to October 1943. How do you Account For the Fact That Britain was Able to Remain Undefeated?

Britain was the Only European Country to Remain Both Undefeated and Opposed to Hitler's Germany Throughout the Period June 1940 to October 1943. How do you Account For the Fact That Britain was Able to Remain Undefeated? After Hitler's Blitzkrieg invasion of Poland, Norway, Belgium, Czechoslovakia, France and Holland, Britain was alone in Europe. The Nazi - Soviet Pact of August 1939, stated neither Germany nor Russia would attack each other. The United States of America had no interest in the War, the opinion still of isolationism. Britain was alone in Europe from June 1940 to October 1943, the point where Italy changed sides. Britain sent troops from the B.E.F to France, but the almighty power of the German forces had pushed them back to the beaches of Dunkirk, where 1/2 million British and French troops were surrounded. A major fault of Hitler's actions were that he had not pushed further the last remaining miles to the enemy. His troops had become so exhausted due to the invasion of Europe, they took rest. In this period, Britain sent ships to collect their men. 333,000 were saved. These men were able to fight another day and what could have been a major defeat to Britain was avoided. Another main reason was the geography of Britain. Surrounded by water, planes unable to stay over the country for long without having to refuel and logistically and militarily, invasion was always set to be a problem for enemy forces. ...read more.

They were able to track where U-boats sailed and fill the gaps in the Atlantic. With the advantages of faster British and American Destroyers, the 10cm wavelength radar which is undetectable by U-boat Metox receivers and more efficient convoy systems, the Allies were beginning to win the Battle of the Atlantic. By October 1943, more German U-boats were being destroyed than Allied ships. Without the determination of Churchill and Roosevelt, the continuation of the Navy to send supplies to Britain and the bravery of the Sailors, Britain would have undoubtedly had to surrender. Britain's Colonies and the Commonwealth Empire made troops, raw materials and vital supplies accessible, allowing Britain to continue in the War successfully. Without this continuous supply, the frequent U-boat attacks on Merchant ships would have left the people of Britain isolated and starving and led to inevitable surrender. In Meine Kampf, Adolf Hitler had proclaimed his interest in the Lebensraum policy, which was mainly directed at the Soviet Union. On the 15 May 1941, the invasion of the Soviet Union began, 'Operation Barbarossa'. The War had now developed on two fronts, allowing Britain to recover. With less concentration on the Western front, invasion was always going to be less of a threat. German Forces on the Eastern Front, made up of 3 million men, advanced in three groups. The North group headed for Leningrad, the centre group for Moscow and the Southern forces into the Ukraine. ...read more.

This also ultimately led to the invasion of Italy, to the point where Germany was beginning to retreat, as by October 1943, Italy had changed sides. In conclusion, many major factors enabled Britain to stay opposed and undefeated to Hitler throughout the period June 1940 to October 1943. However, there were more important factors in completing this and other contributory factors. In my opinion, the invasion of Russia was the most important because it proved that the German War machine could be defeated, injecting passion into the Allied people, giving them the urge and power to hang on. In addition, it initiated a two front War, meaning there was less concentration of military force on the West front, which relieved pressure on Britain and to Hitler, invasion was not seen as significant or vital to winning the War. It also drained significant German supplies, especially troops, weakening the German army and lines. Two other incredibly crucial events in this period was the 'Battle of Britain' and 'The Battle of the Atlantic.' These halted any invasion plans and kept Britain from starving out of lack of supplies and an inevitable attack. After the counter attack at Stalingrad, the German Forces were now in retreat from Russia. The invasion and the capitulation of Italy in October 1943 had altered the balance of forces and Germany was retreating throughout Europe. Any invasion plans or concentration of attack on Britain was no longer a possibility or threat. ...read more.