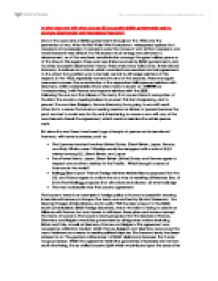 In what ways and with what success did successive British governments seek to promote disarmament and international harmony? One of the core aims of British governments throughout the 1920s was the prevention of war. After the First World War it became a widespread opinion that weapons and possession of weapons were the causes of war; without weapons, war would become very difficult. For this reason much energy was devoted to disarmament, or at the very least arms limitation amongst the great military powers of the time. In this regard, there was very limited success by British governments, and for every successful disarmament treaty, there were many failed ones. 'International Harmony' is defined as a state in which countries have reached mutual agreements to the effect that pacifism was to be held central to all foreign relations. In this respect, in the 1920s, especially towards the end of the decade, there was again measured success. The re-evaluation of the reparations bill improved relations with Germany, whilst considerable efforts were made to reach an entente (or 'understanding') with France and improve relations with the USSR. Following the war and the failures of the treaty that caused French occupation of the Ruhr, the Locarno meeting looked to prevent this from happening, and to prevent the countries (Belgium, France Germany) ...read more.

Also the Kellogg-Briand pact was another agreement which promoted international harmony in the wake of the Locarno Spirit. The treaty was initially intended to be a matter between France and the United States; however on the suggestion of the Americans all countries were involved. Whilst the reinstated British Prime Minister Stanley Baldwin was initially sceptical about the pact, he wished to preserve the tenuous Anglo-American relations and thus accepted the terms of the pact, which once again were centred around the eradication of war. This pact however was far less successful than the Locarno treaty, and as the number of nations involved swelled to 15 the practicality of the agreements became evermore questionable. Whilst the Locarno treaty signatories had pledged to aid one another in the event of a treaty breach, The Kellogg-Briand pact had no such arrangement in place, and for this reason the treaty became nothing more than a statement of intent and goodwill between nations, with no concrete arrangement that prevented or even discouraged the breaking of the agreements. The treaties more positive elements included a massively public signing which acclimatised populations to the extent of the arrangements against war and created a lot of positive publicity for Baldwin's government. ...read more.

A main attempt at promoting peace and disarmament was the League of Nations conference. The first effort at international arms limitation was made at the Hague Conferences of 1899 and 1907, which had failed in their primary objective. Although many contemporary commentators (and Article 231 of the Treaty of Versailles) had blamed the outbreak of the First World War on the "war guilt" of Germany, historians writing in the 1930s began to emphasise the fast-paced arms race preceding 1914. Further, all the major powers except the U.S. had committed themselves to disarmament in both the Treaty of Versailles and the Covenant of the League of Nations. A substantial international non-governmental campaign to promote disarmament also developed in the 1920s and early 1930s.A preparatory commission was initiated by the League in 1925; by 1931, there was sufficient support to hold a conference, which duly began under the chairmanship of former British Foreign Secretary Arthur Henderson. The motivation behind the talks can be summed up by an extract from the message President Franklin D. Roosevelt sent to the conference: "If all nations will agree wholly to eliminate from possession and use the weapons which make possible a successful attack, defences automatically will become impregnable and the frontiers and independence of every nation will become secure." ...read more.