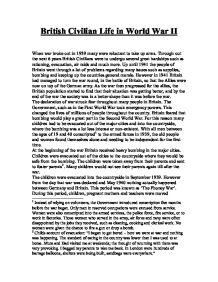 British Civilian Life in World War II When war broke out in 1939 many were reluctant to take up arms. Through out the next 6 years British Civilians were to undergo several great hardships such as rationing, evacuation, air raids and much more. Up until 1941 the people of Britain went through a lot of problems regarding many issues such as supplies, bombing and keeping up the countries general morale. However in 1941 Britain had managed to turn the war round, in the battle of Britain, so that the Allies were now on top of the German army. As the war then progressed for the allies, the British population started to find that their situation was getting better, and by the end of the war the society was in a better shape than it was before the war. The declaration of war struck fear throughout many people in Britain. The Government, such as in the First World War took emergency powers. This changed the lives of millions of people throughout the country. Britain feared that bombing would play a great part in the Second World War. For this reason many children had to be evacuated out of the major cities and into the countryside, where the bombing was a lot less intense or non-existent. With all men between the ages of 19 and 40 conscripted1 to the armed forces in 1939, the old people and women found themselves alone and needing to be independent for the first time. ...read more.

Even the moat of the Tower of London was used to grow peas and beans! Criminals flourished under rationing due to the creation of the black market. The black market was used to obtain extra, sometimes rare goods without the use of the ration book. The black market was very open and many people knew how to access the local black market fairly easily. Police men often used to know about the black marketers in their area but often turned a blind eye to the dealings going on and would even in some cases purchase from the black market itself or accept bribes. There were two common views of people towards the black market. One was that the black market undermined the efforts of the British people and it was almost betrayal of the country. The other, which many others went by, was that the black market was generally accepted and even seen as necessary for some people to survive. However, by the end of the war it was found that the average food intake for the country was much higher than it was before the war began. This was because many of the poor people that made up the majority of city folk were too poor to feed themselves and their families properly. This led to the nation as a whole being generally healthier. As the war progressed the supply problem grew smaller. ...read more.

Look after everyone else". Then they started singing 'Tipperary' and shouting to the people in the road, "Are we downhearted? No." 5 Clothes shops were set up where clothes too small could be exchanged for other articles of clothing. It was not uncommon for wedding dresses to be passed from family to family or even made out of parachute lining. 6 For all rationed items, coupons were required as well as money, and the number required varied according to availability. The famous green ration book led pregnant mothers and nursing mothers and children under five to the front of the queue, with first choice on nay oranges or bananas that filtered through, a daily pint of milk and a double supply of eggs. 7 A group of families could go to a farmer and "adopt a pig." Each family would pay a share for the farmer to look after the pig. When the pig was fully-grown the farmer would kill it and each family would receive a share of the meat. 8 Rhymes were created to help the message of the Dig for Victory campaign. One of the most famous being Dr. Carrot: Dig! Dig! Dig! And your muscles will grow big, Keep on pushing in the spade! Never mind the worms Just ignore their squirms And when your back aches, laugh with glee And keep on diggin' Till we give our foes a wiggin' Dig! Dig! Dig! To victory! ...read more.