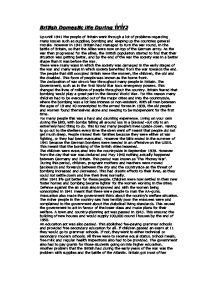 British Domestic life During WW2 Up until 1941 the people of Britain went through a lot of problems regarding many issues such as supplies, bombing and keeping up the countries general morale. However in 1941 Britain had managed to turn the war round, in the battle of Britain, so that the Allies were now on top of the German army. As the war then progressed for the allies, the British population started to find that their situation was getting better, and by the end of the war the society was in a better shape than it was before the war. There were many ways in which the society was damaged in the early stages of the war and many ways in which society benefited from the war towards the end. The people that still occupied Britain were the women, the children, the old and the disabled. This force of people was known as the home front. The declaration of war struck fear throughout many people in Britain. The Government, such as in the First World War took emergency powers. This changed the lives of millions of people throughout the country. Britain feared that bombing would play a great part in the Second World War. For this reason many children had to be evacuated out of the major cities and into the countryside, where the bombing was a lot less intense or non-existent. ...read more.

This caused a shortage of supplies throughout Britain. This shortage led to the government setting up a 'ministry of food' to control supplies and advise the public. In 1940 they started to ration the supplies of food. At the beginning it was just the basic foods that were rationed such as sugar, butter, cheese, and bacon. Then, later on in 1940 other meats and tea were rationed as well. There was a policy for equal shares on all of the basic foods and anything else was purchased on a point's basis. This caused long queues, which was another one of the problems that the home front had to face. Many would even sleep outside the shop doors in order to get their rations. The black market flourished in some areas selling off goods that were rationed or were hard to get hold of. The 'ministry of food' also sent scientists to advise on healthy foods that used more non-rationed foods such as vegetables and brown bread. There were also shortages of other goods as well as food, Such as the control of raw materials in manufacturing. At first this annoyed many people because they were limited to the lives that they lead and the clothes that they wore. ...read more.

However all of this was changed due to the war efforts, evacuation, rationing and the actual fighting during the war. The barrier was broken down between the social classes and people realised that they were just the same. This caused the nation to see equality between the social classes, which was what rationing introduced to many people. Another social victory for the country was in the way that people viewed women towards the end of the war. Before the war women were seen as less important and less able than men were. Women were refused jobs and could not join the armed forces. Instead, most women were housewives and supported by their husbands. Those that did have jobs were often in unskilled labour, such as textiles. However as the war progressed and women participated in the war effort and were conscripted in 1941, people started to see women as equal and just as capable as men were. Women had the chance to prove to the country that they could work hard, and got equal rights in return. The British government and the people themselves were responsible for helping the home front out of this hardship and disruption. For these reasons, I feel that the British civilian population was not so hardly treated in the last 12 months of the war as they were up till 1941. ...read more.