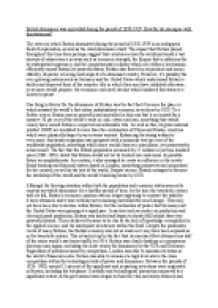 British dominance was unrivalled during the period of 1850-1929. How far do you agree with this statement?

﻿British dominance was unrivalled during the period of 1850-1929. How far do you agree with this statement? The extent in which Britain dominated during the period of 1850-1929 is an ambiguous field of exploration, as well as the word dominance itself. The impact that Britain played throughout this time does perhaps, suggest that countries across the world portrayed a vast amount of subservience in areas such as economic strength, the Empire that is infamous for its widespread supremacy, and the complementary military which as a defence mechanism, efficiently earned Britain its powerful status. Britain also thrived in its political and social stability, its power covering most aspects of a dominant country. However, it?s possibly the ever-growing nations such as Germany and the United States which undermined Britain?s ability and deprived them of the majestic title in which they may have inhibited otherwise; or as some would propose, the economic and naval decline which hindered this status to a limited expense. One thing in favour for the dominance of Britain was the fact that it became the place in which situated the world?s first urban industrialised economy, as early as by 1850. To a further extent, Britain was so powerful and unrivalled in this area that it accounted for a massive 50 per cent of the world?s trade in coal, cotton and iron, something that would clearly have earned Britain a respected and admirable title. As well as this, its gross national product (GNP) ...read more.

One area that may have deprived Britain?s dominance and unrivalled name was the army. In the years from 1854-1929, the size of the army reflected the physical size of Britain itself; it was relatively small for the majority of the time, consisting of rarely more than 130,000 strong in peacetime. This did not however, include the troops that were stationed in India. The army had two main functions and tasks- it had to maintain home defence and control maintenance of the Empire. The army showed dysfunctional aspects due to the harsh discipline, the poor conditions and the low wages. Each of these factors contributed to the manpower problems. The majority of the rank and file were simply men who joined due to economic necessity, meaning they were either unskilled, and or casual labourers. Clearly this was hindering and depriving the success and power that Britain could reach, so dominance in this field is extremely miniscule, or even non-existent in some cases. Throughout the nineteenth century, there were impacting changes imposed in the national and social composition of the army. Changes in the demographic area of the army meant that it focused on recruits from urban areas instead of the countryside. Assuming that they were brought up in the open air, men from agricultural backgrounds were favoured by the officers, as they were seen as better suited soldiers than those from towns. Despite this, it may have been the complete opposite in reality, as the experience of Soldiers in the American Civil War suggests that those born and raised in towns had a longer life expectancy due to resistance to germs being much stronger. ...read more.

As well as this, the Empire showed a decline in trade as it decreased from 49 per cent in 1860, to 36 per cent in 1929. Nevertheless, the dominance in which the Empire inhibited was clearly unrivalled, no other Empire showed such large success and surface area control. To conclude, each area of dominance in economic strength, the military and the British Empire, Britain as a whole did appear to be unrivalled in dominance between 1850 and 1929, to a further extent in certain areas more than others. One aspect that particularly works in favour of total control is the Royal Navy. It?s extreme power and success was not seen in any other country in this period of time, and Britain thrived off this. They were able to maintain a high status that would have lured other countries into defeat- a mechanism which would have been extremely admirable. The economic strength was so vast, that even as a small country, Britain was the workshop of the world and the world?s banking house by 1870. It was the centre of economic power, remaining unrivalled for a great period of time. Although Germany and the USA were ahead in terms of technological sectors, Britain soon adopted an attitude which gave them the ability to thrive in scientific invention. The Empire itself was so large it would be merely an impossible to match such dominance, however despite the fact it was physically empowering, its minimal success rate was perhaps not worth such a costly factor. Taking each area into account, it?s quite clear that Britain was progressively ahead of other countries, leaving it as the leading nation of dominance and success. ...read more.