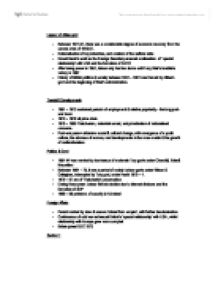 Legacy of Attlee govt - Between 1947-51, there was a considerable degree of economic recovery from the severe crisis of 1945-57. - Nationalisation of key industries, and creation of the welfare state - Ernest Bevin's work as the Foreign Secretary ensured continuation of ' special relationship' with USA and the formation of NATO - After losing power in 1951, labour only had two terms until Tony Blair's landslide victory in 1997 - History of British politics & society between 1951 - 1997 was framed by Attlee's govt and the beginning of Blair's administration. Trends& Developments - 1951 - 1973 sustained periods of employment & relative popularity - the long post-war boom - 1973 - 1979 oil price crisis - 1979 - 1990 Thatcherism, industrial unrest, and privatisation of nationalised concerns. - Post-war years= extensive social & cultural change, with emergence of a youth culture, the advance of women, vast developments in the mass media & the growth of multiculturalism. Politics & Govt - 1951-64 was marked by dominance of moderate Tory govts under Churchill, Eden& Macmillan - Between 1964 - 79, it was a period of mainly Labour govts under Wilson & Callaghan, interrupted by Tory govt, under Heath 1970 - 4. ...read more.

- post war labour didn't move with the post war consensus - west Germany 1959, key turning point when SPD reformed and dropped Marxist ideology for modernisation and democracy - Thatcher's successful rebellion against Heath in 1975 marked the conservative party 's shift from the post war consensus - Thatcher's election success marked the degree of part divisions Politics - Tories could hardly be called right winged in the 1950's - Both Churchill and Eden made radical movements to alter the relationships between the government and the trade unions - Steel industry was denationalised in 1953 - No attempt to reverse what the labour government had done between 1945 - 51 - Macmillan government did more to consolidate the post war consensus than to challenge it - 1959 Macmillan's government continued to follow centrist policies Economic Policy - continuation of the post war consensus under the government was referred to as 'butskellism' - Butler was a key figure in the conservative party (chancellor of exchequer) and was a serious contender for leadership in 1957 - Butler clashed with Bevan over the costs of the NHS - 1963 - Gaitskell became leader of the labour party - Gaitskell had open ...read more.

under strain due to the Suez crisis - Macmillan read the lessons of the affair and was quick to mend bridges with the US - Macmillan's wind of change speech led the way to rapid decolonisation across Africa - Macmillan applied to get Britain in the EEC which got declined due to De Gaulle - Under the government of Wilson is when Britain was accepted into the EEC The significance of the 1964 - The labour campaign made much of the theme of modernisation - Public mood of expectancy in 1964 , reflected the sense that 1960's Britain was going through fundamental social and cultural change - There was no change in political direction, in 1964 the labour governments under Wilson & Callaghan succeed in carrying on with their radical promises - Labour's policies weren't that different from what the conservatives would have done and there was emphasis on the economic modernisation - Why were the labour governments between 1964 and 1979 unable to achieve more success? - When Harold Wilson came into power in 1964 optimism among the labour supporters was high, - Wilson seemed to be a talented leader who had a wide support in the country ...read more.