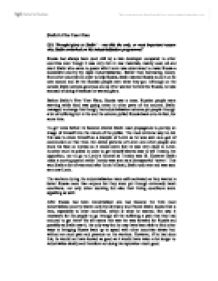 'Brought glory to Stalin' - was this the only, or most important reason why Stalin embarked on his industrialisation programme?

Stalin's Five Year Plan Q1) 'Brought glory to Stalin' - was this the only, or most important reason why Stalin embarked on his industrialisation programme? Russia had always been (and still is) a late developer compared to other countries even though it was very rich in raw materials, mainly coal, oil and steel. Stalin who came to power after Lenin was determined to make Russia a successful country by rapid industrialisation. Rather than borrowing money from other countries in order to help Russia, Stalin wanted Russia to do it on its own accord and let the Russian people earn what they got. Although on the outside Stalin seemed generous and as if he wanted the best for Russia, he was accused of doing it because he wanted glory. Before Stalin's Five Year Plans, Russia was a mess. Russian people were starving while food was going rotten in other parts of the country. Stalin managed to change this though, his industrialisation scheme put people through a lot of suffering but in the end the scheme pulled Russia back onto its feet, for some time. To get votes before he became elected Stalin used propaganda to portray an image of himself into the minds of the public. The most extreme way he did this was to show himself as a disciple of Lenin as he was seen as a god of communism at that time. ...read more.

An example of this is the between 1921 and 1937 coal, oil and steel production all raised by at least fifteen times. Coal from 5 million tonnes - 140 million tonnes Oil from 2 million tonnes - 30 million tonnes Steel from less than 1 million tonnes - 18 million tonnes This was a vast improvement for Russia, it brought Russia up from being one of the most economically behind countries to the third in the world, Stalin deserved a lot of credit for doing this but was this the only reason? Propaganda at the time portrayed Stalin as being a saint showing him with young children made him look very patriotic and noble. This was and still is a tactic that many people in the public eye use. However, there was a huge amount of suffering endured by the Russian workers due to Stalin's five year plans. Statistics were filtered from the press to keep Stalin's reputation to how he wanted it. This could be seen as an act to save Stalin but also partly to keep the people of Russia motivated. The nations spirits needed to be kept high in order for industrialisation to succeed. Q3)'Brought Misery to his people - in what ways did Russian people suffer? - is there any way in which life improved? ...read more.

The USSR...was one of the world's greatest industrial powers.' Even though enduring the industrialisation of Russia was very hard on its people, there were major changes in Russia afterwards. The government needed to prove this to its people providing jobs and better housing. Q4) What verdict would you give on the Five Year Plans? The Five Year plans were successful eventually. The Plans gave Russia a head start into World War Two, if Russia had not been industrialised, it would have been in a mess during the Second World War because it would have had no money to fight let alone feed its people. Russia had climbed from one of the least to one of the most industrialised countries in twenty years. However, this did not last as now Russia is not as powerful as it was after industrialisation in the 1930s. Industrialisation was definitely a benefit after it had been done as it brought power and money to the USSR however some people thought that it would have happened gradually even if it had not been for the Five Year Plans because Russia is so rich in raw materials. Some take the view that the Five Year Plans were a failure as Russian people suffered due to the lack of care from Stalin and people of higher classes. For example having untrained workers meant work was made extremely dangerous for everyone there, many people were hurt and killed on job sites leaving family behind with nothing to live for. ...read more.