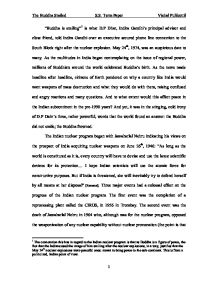 &quot;Buddha is smiling&quot;[1] is what D.P Dhar, Indira Gandhi's principal advisor and close friend, told Indira Gandhi over an executive secured phone line connection to the South Block right after the nuclear explosion.

"Buddha is smiling"1 is what D.P Dhar, Indira Gandhi's principal advisor and close friend, told Indira Gandhi over an executive secured phone line connection to the South Block right after the nuclear explosion. May 24th, 1974, was an auspicious date to many. As the multitudes in India began contemplating on the issue of regional power, millions of Buddhists around the world celebrated Buddha's birth. As the news made headline after headline, citizens of Earth pondered on why a country like India would want weapons of mass destruction and what they would do with them, raising confused and angry reactions and many questions. And to what extent would this affect peace in the Indian subcontinent in the pre-1990 years? And yet, it was in the stinging, cold irony of D.P Dahr's three, rather powerful, words that the world found an answer: the Buddha did not smile; the Buddha frowned. The Indian nuclear program began with Jawaharlal Nehru indicating his views on the prospect of India acquiring nuclear weapons on June 26th, 1946: "As long as the world is constituted as it is, every country will have to devise and use the latest scientific devices for its protection... ...read more.

But although the Brasstacks incident ended peacefully this time, the past reminded them that in the future, occurrences like this might not end as smoothly without bilateral dialogue. Nuclear optimists use the deterrence theory to support their optimism. In fact, most of the arguments that nuclear optimists put forth are dependent on the validity of the deterrence theory. The deterrence theory, in essence, states that political leaders will not risk using their nuclear weapons if there is even the slightest likelihood of a retaliatory strike. Thus, nuclear optimists argue that stability can be achieved through this 'standstill' on the use of nuclear weapons. The deterrence theory puts the basis of its argument on the prospect of MAD, or Mutually Assured Destruction, a frightful reality that, unfortunately, strives not on the ideal of turning the other cheek, but on the ideal of the threat of striking the other cheek. However, the dangers of reckless rhetoric far outweighed the promises of stability that the Bomb brought turning the deterrence theory, in application to the subcontinent, into a mere dream. Due to the lack of proper communication between the military heads in both countries, rhetorical damage wounded understanding and was usually taken as a threat. ...read more.

Nuclear weapons, no matter how powerful or how secure, will always have a delicate spot, an Achilles heel: a weakness, which lies in their sole purpose and reason for existence. All it would take is the simple pressing of a button, a command, and the sub-continent will plunge into the darkness of a nuclear winter5. Yet, sometimes, it seems as if we are already experiencing that winter for our cold hearts and cold minds cannot foresee the dangers that a nuclearized sub-continent may bring. So then... Pigs can fly. The Moon is cheese. And the Buddha smiled. For the reality of the nuclear dimension in South Asia is much too delicate to work around or to ignore. We do not have the humanity in us to witness the Buddha weeping. So: to what extent did the 1974 Indian nuclear tests affect peace in the subcontinent? To the extent that humanity in the Subcontinent may never live a day without living in fear. To the extent that every thing a politician in India or Pakistan says is at risk of being misinterpreted. To the extent that the generations that live here in and will live here in the Subcontinent will face the reality of nuclear weapons. For the Buddha did not smile. The Buddha frowned. ...read more.