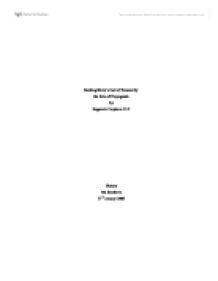 Building Stalin's Cult of Personality: The Role of Propaganda

Building Stalin's Cult of Personality: the Role of Propaganda by Bogomila Traykova 11/2 History Ms. Semkova 11th January 2008 What is the significance of propaganda throughout history? Why are the great rulers so great? How do rulers like Hitler, Stalin, Mussolini and many others manage to win people's approval and support? All these questions can be answered with a single word - propaganda. Propaganda has been helping great rulers to establish great states and it has also brought confidence and stability to these states. During the beginning of the 20th century Russia was suffering a crisis ("The Stalin Cult: the Cult of Personality"). After World War I and the Civil War, Russia had reached the pick of its downfall, so just when Russia needed someone that could bring back the order, Stalin and his cult of personality gave Russia a way out of the crisis ("The Stalin Cult: the Cult of Personality"). Using propaganda Stalin managed to unite the whole nation and, thus lead Russia out of the crisis. Soon after Stalin's death it was Nikita Khrushchev, who in 1956 at the Twentieth Congress of the Communist Party exposed Stalin's "Cult of Personality", coined the term "Stalinism" and began calling him "Vozhd" (meaning Leader) ("Cult of Personality"). This cult helped the "Vozhd" maintain control in the USSR, while propaganda and manipulation were massively used to extend and reinforce his cult of personality. ...read more.

Not only Stalin concentrated on manipulation of the party, but immediately after Lenin's death he also endorsed an extravagant quasi-Byzantine cult of the departed leader in order to start building his own cult of personality and undermine his opponents' authority ("The Struggle for Succession"). He rewrote history in such a way as to make himself appear much closer to Lenin than he was in fact ("Stalin and The Cult of Personality1"). Since people were vulnerable at that time it was easy for them to be convinced in Stalin's new reproach that in its own way looked very much like Lenin's. Stalin indeed loved Lenin and wanted to prove his love not only to other people but to himself as well ("Stalin and The Cult of Personality1"). He succeeded in doing so because people began putting their names together ("Stalin and The Cult of Personality1"). "Laughter in the village, Voice behind the plow, Lenin and Stalin, And these verses now..." (by Pasternak) ("Stalin and The Cult of Personality2"). Stalin finally managed to mislead the public that he was closer to Lenin than Trotsky was and this made him the ideal choice for the new Leader. After getting rid of Trotsky, Stalin also used propaganda to erase his image from any popular photographs of the time (look at Appendix - Propaganda #1, #2) ...read more.

The end justified the means and it did not matter if a few photos had to be adjusted. Spontaneity and originality were driven out by terror and fear, thus producing the new art - the art of Social Realism ("The Struggle for Succession"). It dominated in the USSR long after Stalin's death in 1953 ("Revolution by Design"). Stalin has made a lot of reforms to rebuilt the USSR, which all differ in methods and tactics, but they all have at least one thing in common - the usage of propaganda and manipulation. Stalin's cult of personality is not by chance because it succeeded to unify the nation, stabilize the state and therefore bring Russia back to power. Even though his reign was primarily related to terror, horror and slaughter, it also helped Russia gradually get out of the crisis it suffered due do previous wars. To rise to power, he built his own by manipulative tactics and propaganda, which on the other hand built Stalin's image. His name will be remembered in history, for he will always remain "the man of steel". Appendix Propaganda #1 http://www.newseum.org/berlinwall/commissar_vanishes/reinventing.htm The first picture represents Stalin and Trotsky celebrating the second aniversary of the Russian Revolution in Red square, while at the second photograph Trotsky is removed. Propaganda #2 http://www.newseum.org/berlinwall/commissar_vanishes/reinventing.htm In the first picture Lenin is adressing the troops, while Trotsky is in the foreground. On the second picture Trotsky is removed. Propaganda #3 http://imagecache2.allposters.com/images/pic/VAS/0000-1404-4~USSR-Udarnaya-Brigada-Proletariata-Vsego-Avant-Garde-Posters.jpg http://heninen.net/sortavala/raids/2.jpg Propaganda #4 http://www.newseum.org/berlinwall/commissar_vanishes/stalin. ...read more.