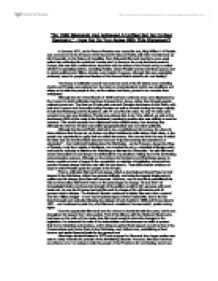 "By 1890 Bismarck Had Achieved A Unified But Not United Germany." - How Far Do You Agree With This Statement? In January 1871, as the Franco-Prussian war neared its end, King William I of Prussia was announced as the Emperor of the Second Empire (or Reich), with Otto Von Bismarck as his Chancellor, in the Palace of Versailles. From this point Bismarck had led a once weak nation into achieving his acclaimed 'master plan': to become the most dominant power in Europe, this was then confirmed ten days later with the defeat of the French army; to united all German speaking nations, excluding Austria, where Prussia was the dominant power; and to obtain political and military victories over Austria. However, although this was undeniably achieved, were the peoples and leaders of the Second Reich united in aim and feeling? The theory of unification was all very well, but each of the 25 states (now excluding Austria and Prussia annexations from the German Confederation) had its own traditions and ethos, so to unite the people in fact, as the nations had been, proved more complex than anticipated. Although the aim of the liberals of 1849 had been achieved, they were displeased by the manner in which unification had been imposed from above, rather than through popular national movement. The German Empire also ensured Prussian dominance in the Reich, with both the Emperor and Chancellor being Prussian as well as Prussia having the large majority in both the Reichstag and the Budesrat, with 17 out of the 58 votes. ...read more.

Having said this the demise of the National Liberals in the process of the tariff introductions allowed Bismarck to once more stress national interests to the population and strengthen the idea of a German identity throughout the Reich. For Bismarck's part, he viewed the Catholics as the major cause of disunity in his Protestant, Prussianized government he had so carefully set up, and so saw them as a threat to the peace, and believed they were plotting Prussia's downfall. Catholic dominated countries surrounded the borders of the Empire and even the south German states still associated with the Austrians, a Catholic country, rather than the Prussians. This fact alone is yet another sign of already instituted disloyalty within the Union, meaning that it would take a lot to unite such a diversity of people in national objective and attitude. This led Bismarck to believe that to attack the Catholics would weaken, and hopefully destroy, one of the main causes of hostility in the Empire. Nevertheless, the states involved in the North German Confederation had been largely Protestant, leaving the Catholics as a minority culture. The policy he launched became known as the 'Kulturkampf', translated as 'struggle for culture', and represented the struggle for power between the protestant Bismarck and the Roman Catholic Church. Yet this threat was only bought to light by the success of the Catholic Centre Party in the 1871. ...read more.

As Bismarck himself said: "Whoever has a pension fro his old age, he is much more content and easier to handle than the person who has no prospects." Furthermore, Bismarck also built on the economic prosperity of Prussia. He kept the standards of living in Prussia exceptionally high, and the economic prosperity and standard of living contented the potentially explosive elements of middle-class Germany. In this way Bismarck removed the threat of the revolution predicted by Karl Marx. In conclusion to this, although the people of the German Empire were not all united in aim as Bismarck had hoped, this was always an unlikely dream as even in modern society there are different political parties representing the different views the nation holds. It could even be said that his obsessive views of nationalism leading to the persecution of what he saw as minority groups set a basis for the extreme views and beliefs seen in Germany prior to the Second World War. Having said this, Bismarck did more in terms of state welfare for the nation than any other country had even began to anticipate, although perhaps not for the right reasons, this fact cannot be overruled. Therefore, despite not achieving unity within the united states making up the German Empire, or achieving his objective in the discrimination of such groups as the Socialists, Bismarck lay down the founding feelings of nationalism for future generations as well as leading the way in welfare reform for other countries to follow. ...read more.