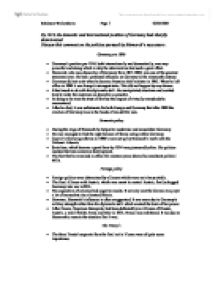 By 1914 the domestic and international position of Germany had sharply deteriorated - Discuss this comment on the policies pursued by Bismarck's successors.

By 1914 the domestic and international position of Germany had sharply deteriorated. Discuss this comment on the policies pursued by Bismarck's successors. Germany pre 1890 * Germany's position pre-1914, both internationally and domestically, was very powerful and strong which is why the deterioration had such a great affect. * Bismarck, who was chancellor of Germany from 1871-1890, was one of the greatest statesman ever. He had a profound influence on Germany in the nineteenth century. * Germany did not exist when he became Prussian chief minister in 1862. When he left office in 1890 it was Europe's strongest state. This did not happen by any chance. * It had much to do with his diplomatic skill. He manipulated situations and worked hard to make the outcomes as desirable as possible. * In doing so he won the trust of few but the respect of virtually everybody he encountered. * After he died, it was unfortunate for both Europe and Germany that after 1890 the creation of Germany was in the hands of less skilful men. Domestic policy * During the reign of Bismarck he helped to modernise and consolidate Germany. ...read more.

* He surrounded himself with personal friends who did little to temper his pretensions to grandeur. * He was determined to be his own ruler. However none of his chancellors were the of the calibre of Bismarck * He boasted that he never read the constitution which gave him considerable influence because he chose who to talk to and who to appoint Caprivi's reforms (Domestic) * Leo von Caprivi introduced several reforms and laws. * These reforms were introduced to make Germany a more liberal country: * working hours for women were restricted * industrial courts to arbitrate wage claims were set up and workers were allowed to elect committees to negotiate with employers about working conditions. * Laws of socialism lapse factory inspection was made more rigorous * tariffs were reduced in order to stimulate foreign trade-food import prices were reduced * SPD was gaining more support, Foreign policy (International) * Bismarck dominated foreign policy's during the period of 1871-1888 with the support of Wilhelm I * To avoid war, Bismarck wanted to remain one of the five great powers * Bismarck's cornerstones o foreign policy were: 1. ...read more.

This could not be compensated by a few colonial gains * This position and the growing German awareness of this fact led some historians to accuse the Kaiser's government of deliberately manufacturing a war crises to enable Germany to brake out of encirclement whilst there was still time * In 1914 war plans existed, such as the notorious Schlieffen Plan which assumed a two-front war with France and Russia Differences between the Germany of 1914 and the Germany of 1871-1890 * Germany was more powerful military and had the second greatest navy in the world * Germany was the greatest economic power on the continent * Germany was led less effectively, both domestically and internationally Wilhelm II than under Bismarck * There had been advantages in living and working conditions * Nationalist feelings grew * Parliamentary system became more mature and society became more modern and complex * Most of the gains were shattered by WWI (World War One) * Germany had a brief experiment with a democratic government in the 1920's but than Germany experienced a more sinister, authoritarian regime, known as Nazism Robinson Wollersheim Page 1 02/05/2007 ...read more.