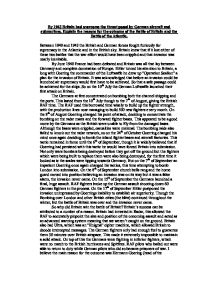 By 1943 Britain had overcome the threat posed by German aircraft and submarines. Explain the reasons for the outcome of the Battle of Britain and the Battle of the Atlantic.

By 1943 Britain had overcome the threat posed by German aircraft and submarines. Explain the reasons for the outcome of the Battle of Britain and the Battle of the Atlantic. Between 1940 and 1943 the British and German forces fought furiously for supremacy in the Atlantic and in the British sky. Britain knew that if it lost either of these two battles that the war effort would have been crippled and that invasion was nearly inevitable. By June 1940 France had been defeated and Britain was all that lay between Germany and complete domination of Europe. Hitler turned his attention to Britain, a long with Goering the commander of the Luftwaffe he drew up "Operation Sealion" a plan for the invasion of Britain. It was acknowledged that before an invasion could be launched air supremacy would first have to be achieved. So that a safe passage could be achieved for the ships. So on the 10th July the German Luftwaffe launched their first attack on Britain. The Germans at first concentrated on bombing both the channel shipping and the ports. This lasted from the 10th July though to the 7th of August, giving the British RAF time. The RAF used this borrowed time wisely to build up the fighter strength, with the production lines now managing to build 500 new fighters every month. ...read more.

Although the battle of Britain may not be seen as an outright victory the courage and sacrifice of the British pilots saved not only Britain from invasion but also paved the way for the final victory in 1944. In 1939 when Britain went to war with Germany, Britain had over 21 million tonnes of merchant shipping compared with the 13.5 tonnes owned by Japan, Germany and Italy combined. This was because Britain was a densely populated island, which relied on overseas supplies, mainly from the U.S.A and the British Empire. It was these so supplies which kept Britain afloat so without them the war effort would have been crippled. Hitler and Doernitz (German naval commander) realised this and in 1939 a campaign of terror was launched on the merchant ships using U-boats. On the day that Britain declared war on Germany the submarine U-30 sink the British cruise liner "Athena" killing 1400 people. This was against orders from Hitler but within 3 months German U-boats were given permission to shoot British ships on site. The next 15 months were the 1st "Happy time" for Germany. They sunk 2 million tonnes in the first 9 months of the war and a further 2.5 million tonnes in the following 6months. ...read more.

It was a quick as a corvette and had the weapons capacity of a destroyer and was equipped with radar. All of these were introduced around the beginning of 1943. Slowly but surely the number of merchant ships being sunk decreased and the amount of German U-boats being sunk increased. By May 1943 Doernitz was forced to withdraw the U-boats as in a matter of weeks he had lost one third of his u-boats. I believe that winning the battle of the Atlantic was a key step towards winning the war. This is because if Britain had lost the battle of the Atlantic she would have been crippled as it relied on imports for vast amount of its food. Also winning the battle of the Atlantic ensured safer passage for the American soldiers who would have to cross the ocean to get to Britain so that D-day could be launched. America would not have sent the vital troops if they did not have a safe passage. Both battles protected Britain from nearly certain invasion. If we had lost either we would have been helpless and stranded with invasion inevitable. They were both the first two allied victories during the war and shifted the balance towards Britain and America. It was from these two victories that the allies gained a foothold from which they could launch their assault on the nazi-dominated Europe. ...read more.