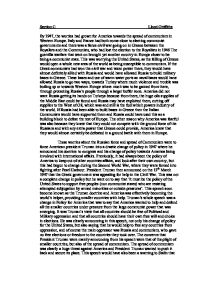 By 1947, the worries had grown for America towards the spread of communism in Western Europe.

Section C Lloyd Griffiths By 1947, the worries had grown for America towards the spread of communism in Western Europe. Italy and France had both come close to electing communist governments and there was a fierce civil war going on in Greece between the Royalists and the Communists, who had lost the election to the Royalists in 1946 The guerrilla warfare that went on brought yet another country in Europe closer to be being a communist state. This was worrying the United States, as the felling of Greece would open a whole new area of the world as being susceptible to communism. If the Greek communists had won the civil war and taken power there, they would have almost definitely allied with Russia and would have allowed Russia to build military bases in Greece. These bases and use of warm water ports as naval bases would have allowed Russia to go two ways, towards Turkey where much violence and trouble was boiling up or towards Western Europe where much was to be gained from there, through protecting Russia's people through a larger buffer zone. ...read more.

Truman's whole speech was a change in Policy for America that was to say that America wanted to help and defend all the smaller countries under pressure from the large communist power that was emerging. It was Truman's view that all countries should be free of Political and Military oppression and that all countries should have their own free will and choice in elections. He was clearly announcing in this speech, not only his change of policy for the United States, but also saying that he would help to free any countries from oppression, and of course the main oppressor was Russia and communism, who gave no free elections or freedom to the countries they took over. The concerns that President Truman were mainly announcing from his speech were that of the plight of smaller countries, but also of the spread of communism. The spread of communism was clearly a huge threat against America and President Truman wanted to push it back and secure its place. This speech would have also been a warning to Stalin that America was beginning to 'fight' back after the communist capture of Eastern Europe. ...read more.

The other reason was that the destroyed countries would fall to Communism easily if they had nothing to defend or no money to help their cause. As it was announced in the Truman Doctrine, America was now helping smaller countries have their own freedom and if Western Europe was going to fight the threat of Communism, they needed America's support to do so. General Marshall's plan was to give Europe $13000 million (13 billion) of aid of food, loans, goods and gifts. At first the sum was rejected by congress but after communists overthrew the Czechoslovakian government, it gave Congress the message that communism wasn't going stop spreading and it gave the go ahead for the Marshall plan to be implemented. All the countries in Europe were offered Marshall Aid, even Russia, but they angrily rejected this and the whole of the U.S.S.R' s colonies were denied the chance to use the Aid. Stalin's reaction to Marshall aid was one that he thought it was trying to put pressure on European countries and force their beliefs with the money they had over everyone, this view showed by the Russian telling the 'Yankee go home' to Marshall aid. ...read more.