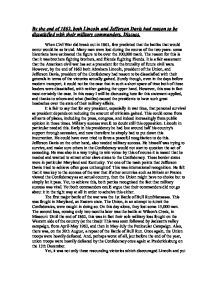 By the end of 1862, both Lincoln and Jefferson Davis had reason to be dissatisfied with their military commanders. Discuss. When Civl War did break out in 1861, few predicted that the battles that would occur would be so brutal

By the end of 1862, both Lincoln and Jefferson Davis had reason to be dissatisfied with their military commanders. Discuss. When Civl War did break out in 1861, few predicted that the battles that would occur would be so brutal. Many men were lost during the course of the two years- some historians have estimated the figure to be over the 100,000 mark. The reason for this is that it was brothers fighting brothers, and friends fughting friends. It is a fair assesment that the American civil war has set a precedent for the brutality of future civil wars. However, by the end of 1862 both Abraham Lincoln, president of the Union, and Jefferson Davis, president of the Confederacy had reason to be dissatisfied with their generals in terms of the victories actually gained. Surely though, even in the days before modern transport, it could not be the case that in such a short space of time both of these leaders were dissatisfied, with neither gaining the upper hand. ...read more.

Yet both commanders could argue that their commanders did not go about it in the right way at all in order to acheive this either. The first major battle of the war was the 1st Battle of Bull Run/Manassas. This was fought in Maryland, an Eastern state. The Union, in an attempt to iutwit the Confederates, were caught in doing so. On this day alone, they lost some 15,000 men. The second loss, coming only two months later was the battle at Wilson's Creek, in Missouri. Until the end of 1862, this was in fact their sole military loss fought on the Western side of the country (at the time)! This was soon followed by Jackson's valley campaign, from April-May 1962, and then in May-July the Peninsular Campaign. Also, there was, on the 30th August, a repeat of the Battle of Bull Run. Once again, the Union troops were heavily defeated. And, perhaps worst of all, jsut before the end of the year, union troops were heavily defeated by the Confederacy once again at Fredericksburg on the 13th December. ...read more.

It seems odd, but neither side seemed to have the upper hand against the other in the war. Whilst the Union won few battles, they were pretty effective at capturing territories and cities. This was of course the opposite for the Confederacy. Both leaders, so determined to ease pressure off of their own backs, neglected almost the armies. In this way, the Confederates and the Union were both starting feel that the war was pointless. Increasingly, people in the South began to feel that secession may not have been such a good idea. The war of course hit them hard too financially. Taxes were needed to cover the cost of the war, and also the people in the South were forgetting the fundamental issue of slavery. Before the war, the prices of slaves had begun to skyrocket. Now, they felt that they were in fact worse off than before they had in fact seceeded from the Union. This of course was not good for Jefferson Davis. Lincoln on the other hand was in fact receiving a different repsonse. He was being attacked in the Senate and Congress for not seeking a peaceful negotiation to the end of the war. ...read more.