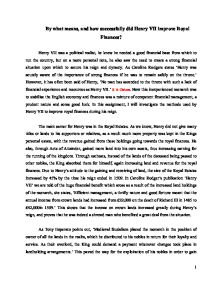 By what means, and how successfully did Henry VII improve Royal Finances?

By what means, and how successfully did Henry VII improve Royal Finances? Henry VII was a political realist, he knew he needed a good financial base from which to run the country, but on a more personal note, he also saw the need to create a strong financial situation upon which to secure his reign and dynasty. As Caroline Rodgers states 'Henry was acutely aware of the importance of strong finances if he was to remain safely on the throne.' However, it has often been said of Henry, 'No man has ascended to the throne with such a lack of financial experience and resources as Henry VII.' S. B. Chrimes. How this inexperienced monarch was to stabilise the English economy and finances was a mixture of competent financial management, a prudent nature and some good luck. In this assignment, I will investigate the methods used by Henry VII to improve royal finances during his reign. The main earner for Henry was in the Royal Estates. As we know, Henry did not give many titles or lands to his supporters or relatives, as a result much more property was kept in the Kings personal estate, with the revenue gained from these holdings going towards the royal finances. He also, through Acts of Attainder, gained more land into his own assets, thus increasing earning for the running of the kingdom. Through escheats, instead of the lands of the deceased being passed to other nobles, the King absorbed them for himself, again increasing land and revenue for the royal finances. ...read more.

Bonds and recognisances boosted this income significantly, fines for illegal retaining also contributed to this sector of income. Any monies gathered from the Law Courts were also added into the treasury and used to increase the royal finances. In the course of Henry's reign, the economy flourished, and it was during this time that Henry's royal finances benefited by the import (tonnage) and export (poundage) taxes placed on goods in England. This could yield impressive amounts of revenue during times of economic growth. A more obscure source of income was that of the so-called, 'French Pension'. This was part of the Treaty of Etaples in 1492, in it, Henry was promised �5,000 per annum to remove their armies from French soil. This was obviously a useful extra sum at the King's disposal. All the sources of income we have read about so far is derived from ordinary or prerogative revenues, meaning that it was the King's right to collect it, and he was obliged to use this sort of income to maintain the Kingdom, to pay for the running of government and to keep his household. However, there were alternate forms of collecting income, these were extraordinary revenues, and were used to fund particular needs of the Kingdom, such as to fight wars, that the King would be unable to afford from his own resources. It was through these extraordinary revenues that Henry could gain more money for the royal finances. ...read more.

By 1509 the annual revenue amounted to �100,000 compared to �65,000 in the last years of Edward IV. This proves how much Henry actually did improve royal finances, and how he brought them up to date. In fact the situation was so good he could even afford to loan major noble families like the Habsburgs huge sums of money, and still carry on running the country as per usual. We can see examples of how successful his methods were in the legacy he left behind. His court was always lavishly kept with no expense spared, he also left one years unspent income aside for his son Henry, his heir, (who was to become Henry VIII) in order so that he would have a firm financial footing when he ascended to the throne. He has been described in his own era as, 'The richest lord that is now known in the entire world.' Showing how his wealth compared to other monarchs at the time. Although the figures quoted in this assignment may not seem like much, by today's standards, however in the early 16th century they were extremely healthy. These were the methods that Henry Tudor, an unknown, untrained, minor noble with no financial management training when he came to power in 1485, had managed in the time he was on the throne until 1509, to improve royal finances to a degree even he would not have thought possible. 1 ...read more.