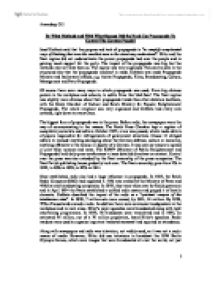 By What Methods and With What Success Did the Nazis Use Propaganda To Control The German People? Josef Gobbels said that the purpose and task of propaganda is "to simplify complicated ways of thinking that even the smallest man in the street may understand". Hitler and the Nazi regime did not underestimate the power propaganda had over the people and in gaining much support for the party. The impact of the propaganda was big, but the methods may not have been so. The regime was very organised. This can be seen in the structured way that the 'propaganda machine' is made. Gobbels was made Propaganda Minister and had several offices, e.g. Active Propaganda, Films, Broadcasting, Culture, Management and Party Propaganda. Of course there were many ways in which propaganda was used. From big obvious posters in the workplace and schools, to subtle films like 'Jud Suss'. The Nazi regime was slightly more obvious about their propaganda trends than other dictators had been, with the Reich Chamber of Culture and Reich Ministry for Popular Enlightenment Propaganda. The whole structure was very organised and Gobbels had every area covered, right down to every Gaue. The biggest form of propaganda was in the press. Before radio, the newspapers were the way of communicating to the masses. ...read more.

Films were probably more effective in keeping support for the regime, rather than bring in more supporters. In this case, entertainment took a priority. Images and visual propaganda was very wide, many photographs and poster were displayed in the workplace, in schools, down the street, everywhere. Hitler had an official photographer who would manage shots. Hitler himself would practice expressions and poses. Posters were very dramatic and powerful, including slogans such as, 'Young people serve the Fuhrer' to ten-year-olds. Away from the media, propaganda was active in other areas, such as education. Many teachers were already sympathetic towards the regime. By 1936, over 30% had joined the Nazi Party voluntarily. However, teachers were pressurised into joining the National Socialist Teachers' League (NSLB). By 1937, 97% had joined. Members had to attend training courses about stressing Nazi ideology and physical education. Nazi officials kept recorded of attendance and those who didn't regularly attend and weren't committed to the regime could be dismissed. Other than the teachers, the regime's other major strategy was changing the curriculum. There was a lot of emphasis on physical education, which, by 1936, took up two hours a day. Of course, Nazi ideas were emphasised too, especially in biology and history. Religious education was seen as insignificant and eventually was replaced. ...read more.

However, architecture was seen as the most artistic form of propaganda. Hitler described it as 'the word in stone'. Hitler favoured a neo-classical, monumental style of building. Hitler also said "Our enemies and our followers must realise that these buildings strengthen our authority". In 1937, during the Paris International Exhibition of Arts and Technology, Albert Speer designed a 65-metre tower, built entirely from German materials and weighing more than 100,000 tonnes. The purpose of this building was to face the Soviets in a rivalry. In May 1933, an organised burning of Books was held in Berlin, in which 20,000 books were burnt in order to cleanse the new Germany. Novelists went into exile, others stayed but were forbidden to publish and some imprisoned. Books were meant to promote Nazi ideas or be neutral. In the theatre, plays had to approved, those that were had content of historical drama, light entertainment and 'blood and soil' stories. The Reich chamber of Music controlled production. Even though music couldn't be used as propaganda as art, posters, etc, it was still monitored to remove Jewish influences. Hitler's favourite composers, Wagner, Strauss and Bruckner, were more heard. Music was used to stir patriotic emotions in marches, rallies and festivals The Nazi regime was very dedicated to propaganda, it had a lot of though and careful construction in gaining, and sometimes pressurised people for, support. Many historians seen the impact of propaganda on the German people as powerful, just like the regime did Amandeep Gill 1 ...read more.