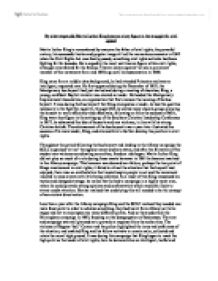 By what stages did Martin Luther King become a key figure in the struggle for civil rights?

By what stages did Martin Luther King become a key figure in the struggle for civil rights? Martin Luther King is remembered by many as the father of civil rights; his powerful oratory, his successful tactics and popular image all led the momentous occasion in 1965 when the Civil Rights Act was finally passed, something civil rights activists had been fighting for for decades. He is arguably the most well known figure within civil rights, although remembered for his famous 'I have a dream speech' he was a prominent member of the movement from mid 1950s up until his assassination in 1968. King came from a middle class background; he had attended Princeton and was an intelligent, respected man. He first appeared during the December of 1955, the Montgomery bus boycott had just started and during a meeting of churches, King, a young, confident Baptist minister was elected as leader. ...read more.

He also realised that underlying this still needed to be the concept of non violent direct action. Less than a year after the Albany campaign King and the SCLC realised they needed one main focal point in order to achieve something, they had learnt from Albany not to be vague and not to encompass too many different points. And so they undertook the Birmingham campaign in 1963, focusing on the desegregation of businesses. The area and campaign was well planned as to provoke a response from the authorities. The violence of Eugene 'bull' Connor and the police highlighted the irony and unfairness of the situation, and enabled King and his fellow activists to remain calm, collected and retain the moral high ground. It was during this campaign that King began to reach the high point as the leader of civil rights; here he demonstrates an intelligent, tactful and carefully planned movement, ensuring response that would attract media and world wide attention. ...read more.

It comparison to earlier years King was not as popular, he began to lose presidential support as a result of his criticisms of the Vietnam war, people in the north were not as susceptible to his messages of passive resistance and non violence. Although he led the poor peoples march, which king called 'the second phase' of civil rights. He was neither as successful nor high profiled as in preceding years. Reasons for this may include the emergence of black power, splinter groups moving the focus away from one clear aim. Also the geographical movement meant that at this stage in Kings time as a civil rights leader he was not as widely supported as he did not appeal to his audience. Nevertheless King used his talent of rhetoric, his ability to inspire and unite people to become the figure head of the movement, through bringing together different groups King made his way from the Bus Boycott in the 1950s to the height of civil rights with the march on Washington in front of the Lincoln memorial, to the passing of the civil rights act. ...read more.