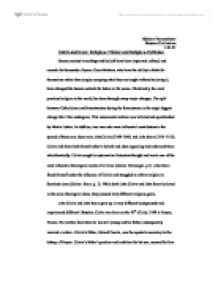 Abhinav Parameshwar Western Civilization 7-02-07 Calvin and Knox: Religious Thinker and Religious Politician Human society's teachings and beliefs have been improved, refined, and remade for thousands of years. Great thinkers, who have the ability to think for themselves rather than simply accepting what they are taught without believing it, have changed the human outlook for better or for worse. Christianity, the most practiced religion in the world, has been through many major changes. The split between Catholicism and Protestantism during the Renaissance is the single biggest change that it has undergone. This monumental schism was initiated and spearheaded by Martin Luther. In addition, two men who were influential contributors to the spread of these new ideas were John Calvin (1509-1564) and John Knox (1514-1572). Calvin and Knox both found Luther's beliefs and ideas appealing and embraced them wholeheartedly. Calvin sought to systematize Protestant thought and wrote one of the most influential theological works of all time (Online: Holznagel, p.1). John Knox found himself under the influence of Calvin and struggled to reform religion in Scotland alone (Online: Knox, p. 1). While both John Calvin and John Knox believed in the same theological ideas, they pursued very different religious goals. John Calvin and John Knox grew up in very different backgrounds and experienced different lifestyles. ...read more.

John Calvin and John Knox both believed in Protestant theology and desired to spread their beliefs. Calvin has often been seen as little more than a systematizer of the more creative philosophies of Luther. He did follow Luther on many important points on the original sin, scriptures, dependence of human beings on divine grace and justification by faith alone; however, his differences with Luther are significant. Calvin was more impressed by God's supremacy and control over the world. Furthermore, Calvin emphasized God's power and glory. Identical to Luther's teachings, Calvin taught that predestination meant that salvation would be taken care of by a loving and utterly reliable God (Online: Calvin, p. 1). However, he emphasized the importance of the scriptures and the bible in that he preached the necessity of a holy life. Calvin also believed that the church had elements of corruption but was more sympathetic and understanding towards it (Online: The Necessity Of Reformation, p. 3). John Knox shared many of these Calvinistic beliefs. Knox spent years in England as part of the English church under Edward VI, having left Scotland. After Edward's death, Knox stayed mainly in Geneva (Online: Lent, p. 2). During Knox's stay in Geneva, he became a follower and student of Calvin, resulting in his conversion to Calvinism (Online: Knox, p. ...read more.

"Irresistible Grace" explains that when God sovereignly chooses to save someone, that individual will certainly be saved. Lastly, Calvinism emphasized and spread "Perseverance of the Saint", a fifth point that taught that those who are chosen by God to attain salvation, are eternally secure and cannot lose their faith (Online: Slick, p. 2). While both John Calvin and John Knox believed in the same theological ideas, they pursued very different religious goals. Under Calvin, Geneva became a woman's paradise due mainly to all of the marital laws he established. Geneva's population grew and education soared as many students were rising from Geneva (Reformation Overview Tape 2). Geneva came to be regarded as a school of religious life. Dissimilarly, politics and religion were interchangeable in Scotland. Under Knox Scotland settled down and religious conflict died down. A single national religion was established and Political tension died down as well. Scotland was finally able to develop. Although both men were influential and made huge impacts to religion during and after their lifetimes, Calvin has had a much larger legacy in the world since. Calvinism is still alive today and formed the basic building blocks for democracy. Calvin has had a great influence on the western civilization. Calvin's reforms stretched much further than Knox's. His beliefs spread all across the world, whereas Knox influence stayed mainly in Scotland. Lastly, Calvin's religious contributions managed to also translate to social development. ...read more.