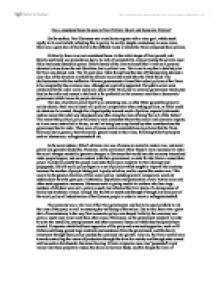 Can a consistent theme be seen in Nazi Political, Social and Economic Policies?

Can a consistent theme be seen in Nazi Political, Social and Economic Policies? On the surface, Nazi Germany was a totalitarian regime with a clear goal, which stuck rigidly to its core beliefs, reflecting this in policy. In reality, despite consistency in some areas, there was a great deal of flexibility in the different ways in which the Nazis composed their policies. Politically, there is no real consistent theme. In the initial stages of Nazi growth, anti-Semitic sentiment was toned down due to its lack of acceptability, only pervading the policies once Hitler had consolidated his power. Hitler's hatred of the Jews was such that it was not a personal decision to tone down the anti-Semitism, but a political one. This is not to say that a detailed plan for Nazi rule did not exist. The 25 point plan, Mein Kampf and the idea of Fuhrerprinzip showed a clear idea of the direction in which the national socialists would take the Third Reich. The disillusionment with the ineffective Wiemar governments allowed the radical policies of the Nazis to be accepted by the common man, although not explicitly supported. ...read more.

However, in the early years Hitler found it more necessary to make the social changes needed to generate changes in Germany that would turn the economy around and make people happier, and more content with their government, in order for the Nazis to consolidate power. In order to passify the people and make them more receptive to Nazi ideology and propaganda, Hitler's social policy began as a set of policies which sought to improve the economy, increase the number of people taking part in party activities, and to expand the master race. This was to be the general direction of Nazi social policy, including several measures to weed out undesirables from the gene pool. Euthanasia, deportation and persecution of non-Ayrian races and other such oppressive measures. Measures such as giving medals to mothers who bore large numbers of children were not a policy as such, but reflected the Nazi ideals of a strong sense of family and traditional values. Groups like the Hitler youth and Strength Through Joy were part of the social policy of indoctrination of the German people in order to create a volksgemeinschaft. ...read more.

Once the economy was geared towards war production, the Nazis took greater control over what private companies did, as well as placing state controls on the factors of production. Perhaps the reason for a lack of absolute consistency in Nazi policy is the lack of an absolutely consistent decision making process. The general ideological base among the key Nazis was the same, but the individual natures of the different party members meant that the way policies were implemented, as well as their content, varied. The Nazis had abandoned the democratic foundations of the Weimar republic and used the emergency powers to rule by decree most of the time. However, Hitler was largely apathetic, so much of the legislating came from within the party and government, often following what was believed to be the 'will of the fuhrer', but due to the lack of coordination and confusion (there were 4 departments all doing the job of the Reich chancellory), different policies from different departments invariably showed inconsistencies. There was a general shape to policy, following the Nazi ideology, and dictated by Fuhrerprinzip. However, the complex nature of Nazi Germany's government, combined with the need to bend to the will of the people occasionally as well as other necessities led to inconsistencies between individual policies. ...read more.