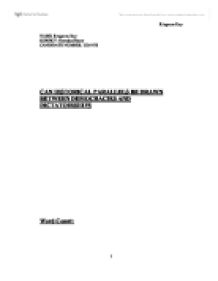 Can historical parallels be drawn between democracies and dictatorships?

NAME: Rituparna Roy SUBJECT: Extended Essay CANDIDATE NUMBER: 1226-070 CAN HISTORICAL PARALLELS BE DRAWN BETWEEN DEMOCRACIES AND DICTATOIRSHIPS Word Count: Introduction Can historical parallels be drawn between democracies and dictatorships? History is more than a string of events and a relationship between them. We are involved with a subject which deals with some eternal truths and generalizations. We are really involved with the same basic phenomenon which repeats themselves in different contexts and at different periods of time. The range of historical events ranges from the bizarre and inexplicable, like the burning of Rome, to the more mundane, such as the fall of governments and the formation of alliances and treaties. Is it strange that the burning of the Rome at the time of Nero, is so oddly similar to the burning of the Reichstag many years later in 1933? Perhaps not, when we compare the two persons who were responsible for both these acts. Both were dictators, both were insecure, both usurpers in their own right. Both hated a community which was fated to suffer immeasurably till they saw better days. Both were narcissists and both loved to be loved. Both were betrayed in their last days. Both loved to be thought of as artists, the one as a musician (if historical records are to be believed) and the other as a slighted and unrecognized painter. In what seems to be one of the most important focal areas of historical interest- kinds of governance- there seems to be similarities which transcend time, age, context and political situations. In the historically present, there seems to be two basic surviving forms of governance: democracy and dictatorship. The one is based on the individuals by the majority of people. The other is based on the choices and contribution of one person, who is a self proclaimed leader and has assumed powers without the consent of the electorate. ...read more.

Culture and Science flourished during the Macedonian, Caesarian and Napoleonic times, whereas the opposite is true for Hitlerian and Stalinist times. This difference is because of the different backgrounds that the dictators come from. For example in the case of Alexander, being a prince was educated by the renowned philosopher, Aristotle. He received a thorough training in rhetoric and literature and stimulated his interest in Science, Medicine, and philosophy, all of which became of the utmost importance for Alexander in his later life. In contrast to that, Hitler was brought up in very humble conditions, received little education, unsuccessful in his field of interest; painting. He was also subjected to racism for being of "non-German" origin. However the one thing that qualifies them as dictators is their undisputed position and their vision for expansion of their country. Expansion is one aim that all dictators have had from the pre-Christian era to the 20th century. This desire to be big comes from their ambition. It is an inborn quality that these dictators had and at times was fuelled by an influence, for instance, in the case of Alexander and Napoleon the influence and driving force was their mother. By the age of 33 (when he died), Alexander had conquered Athens and Thebes and the rest of Greece, he further expanded his empire to Persia and Egypt and almost conquered the north of India. However he was a true intellectual, tolerant of all cultures; he married a Persian woman, encouraged intermarriages, and debated with Brahmins about several topics in India. He also encouraged all forms of Art and Science. Hence it was not only his military genius that earned him the title of "Alexander the Great" but also his other qualities. Napoleon Bonaparte was another military genius who expanded to Italy, France, Egypt, Austria, Poland and Russia. In the battles with Austria, he used the world's first telecommunications system, the Chappe semaphore line, implemented in 1792. ...read more.

France was in no state for a democracy, it was chaotic and there was no harmony in the way people thought. Only a section of the population was organized and literate enough to run a democracy but were often manipulative and corrupt. They needed a benevolent dictatorship, which soon came in the form of Napoleon Bonaparte. Revolutionary movements for a democracy was started in Germany with the years 1848-51. This was during the reign in Federick William IV accession to rhe throne of Prussia. With the bad harvests, starvation, and typhoid epidemics of 1846-47, the liberal demands had become more urgent and new all -Prussia parliament soon put forward requests for freedom of expression, trial by jury, an income tax, and a single National German Parliament elected by the people for the whole of Germany, wished simply to enlarge the powers of the Confederation Diet. The Kaiser refused but soon fell out with this newly called Prussian parliament and dissolved it. ..... to be finished. Another example of an attempted democratic government is the Weimar Republic, which was formed after the Kaiser over overthrown after the first World War. The main failure of the Weimar Republic was it's inability to make the people happy. Germany was extremely humiliated after the WWI and felt that the Republic was unable to regain it's image. The ultimate hit was the Wall Street Crash and the collapse of the economy. The Nazis here took the opportunity to provide solace to the public. Hitler gave speeches about what the Germans wanted to hear. Hitler's nationalistic approach and ability to conveniently blaming the allies for the state of Germany won him the votes and popularity of the people. The people wanted solace more than the right to vote, however they did not realize that this would turn out to be a dictatorship. Like France in the 18th century they were looking for a more efficient, benevolent kind of a rule not a chaotic democracy that provided them with nothing. WORD COUNT: 4126 Rituparna Roy 1 ...read more.