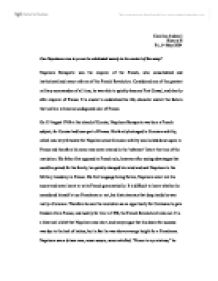 Can Napoleons rise to power be attributed merely to his control of the army?

Carolina Andreoli History H Fri, 14 May 2004 Can Napoleons rise to power be attributed merely to his control of the army? Napoleon Bonaparte was the emperor of the French, who consolidated and institutionalized many reforms of the French Revolution. Considered one of the greatest military commanders of all time, he was able to quickly become First Consul, and shortly after emperor of France. It is crucial to understand his life, character and all the factors that led him to become undisputed ruler of France. On 15 August 1769 at the island of Corsica, Napoleon Bonaparte was born a French subject, for Corsica had been part of France. His family belonged to Corsican nobility, which was very fortunate for Napoleon since Corsican nobility was looked down upon in France and therefore his name was never entered in the 'cidevant' lists at the time of the revolution. His father first opposed to French rule, however after seeing advantages that could be gained for his family, he quickly changed his mind and sent Napoleon to the Military Academy in France. His first language being Italian, Napoleon never lost his accent and never learnt to write French grammatically. It is difficult to know whether he considered himself a true Frenchman or not, but historians say that deep inside he was really a Corsican. ...read more.

On the next day, the Ancients have a meeting at St. Cloud and news arrive informing that directors in Paris have either resigned or been arrested. Without a board of executives, the Directory was over, and the provisional government could not be established. As the discussion was taking too long, Napoleon bursts into the Council of the Ancients and begins to speak. Exactly what happened next is disputed. Some say it was a useless conversation, without dignity or nobility. However the official version of the speech, probably provided by Napoleon, was very different. After giving out his speech to the Ancients, Napoleon then went to a meeting of the Five Hundred. He gave the same speech, but the majority called for his arrest for they believed Napoleon was trying to set up a military dictatorship. Lucien, Napoleon's brother and president of the Five Hundred, was unable to stop the debate, but Napoleon was able to leave the room escorted by grenadiers. Once outside the room, he looked pale and shaken, and the only thing he could say was, "I simply went to inform the deputies of the means of saving the republic, and they answered me with dagger-blows". Lucien uses this as an excuse to dissolve The Five Hundred, accusing the deputies of "assassins". ...read more.

According to Norman Hampson, "What decided Bonaparte's victory was not so much the success of the coup as its favourable reception by public opinion at large. There was not much left that seemed worth fighting for." A 'cloud of political apathy' had settled in France under the Directory, so when the coup took place, there was little reaction by the people, thus making Napoleon's way much easier. It was not until Napoleon's policies were cleared out, that the property-owning classes began to support him seeing advantages of their own. Property-owning classes consisted of landowners and the bourgeoisie, who had bought royalist and church lands and feared that a Jacobin revival or a Bourbon restoration would result in the seizure of their property. The return of Napoleon with a strong government would protect them from the Jacobins and royalist thus assuring their property. Napoleon's influence is evident in France even today. Reminders of him dot Paris, the country's basic law is still the Code Napoleon, and the administrative and judicial systems are essentially Napoleonic. Therefore it can be said that it was not merely because of his military successes that he came to power, but also to the events of the Coup, weakness of the Directory and several other factors that made him First Consul and ruler of France. ...read more.