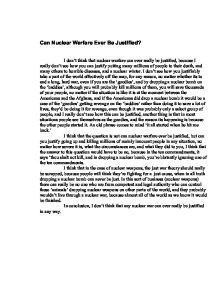 Can Nuclear Warfare Ever Be Justified?

Can Nuclear Warfare Ever Be Justified? I don't think that nuclear warfare can ever really be justified, because I really don't see how you can justify putting many millions of people to their death, and many others to horrible diseases, and a nuclear winter. I don't see how you justifiably take a part of the world effectively off the map, for any reason, no matter whether its to end a long, hard war, even if you are the 'goodies', and by dropping a nuclear bomb on the 'baddies', although you will probably kill millions of them, ...read more.

even though it was probably only a select group of people, and I really don't see how this can be justified, another thing is that in most situations people see themselves as the goodies, and the reason its happening is because the other people started it. An old phrase comes to mind 'it all started when he hit me back.' I think that the question is not can nuclear warfare ever be justified, but can you justify going up and killing millions of mainly innocent people in any situation, no matter how severe it is, what the ...read more.

I think that in the case of nuclear weapons, the just war theory should really be scrapped, because people will think they're fighting for a just cause, when in all truth dropping a nuclear bomb can never be just. In this sort of business (nuclear weapons) there can really be no one who are from competent and legal authority who can control these 'animals' dropping nuclear weapons on other parts of the world, and they probably wouldn't live through a nuclear war, because almost all of the world as we know it would be finished. In conclusion, I don't think that any nuclear war can ever really be justified in any way. ...read more.