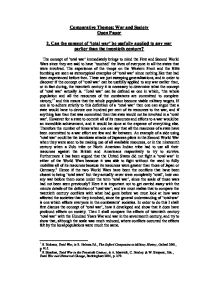 Can the concept of 'total war' be usefully applied to any war earlier than the twentieth century?

Comparative Themes: War and Society Open Paper 2. Can the concept of 'total war' be usefully applied to any war earlier than the twentieth century? The concept of 'total war' immediately brings to mind the First and Second World Wars since they are said to have 'touched' the lives of everyone in all the states that were involved. The experience of the troops on the Western Front and the Blitz bombing are seen as stereotypical examples of 'total war' since nothing like that had been experienced before then. These are just sweeping generalisations, and in order to discover if the concept of 'total war' can be usefully applied to any war earlier than, or in fact during, the twentieth century it is necessary to determine what the concept of 'total war' actually is. 'Total war' can be defined as one in which, 'the whole population and all the resources of the combatants are committed to complete victory,'1 and this means that the whole population become viable military targets. If one is to adhere strictly to this definition of a 'total war' then one can argue that a state would have to devote one hundred per cent of its resources to the war, and if anything less than that was committed then that state would not be involved in a 'total war'. However for a state to commit all of its resources and efforts to a war would be an incredible achievement, and it would be done at the expense of everything else. Therefore the number of times when one can say that all the resources of a state have been committed to a war effort are few and far between. An example of a side using 'total war' could be the kamikaze attacks of Japanese pilots in the Second World War when they were seen to be making use of all available resources, or in the nineteenth century when a Zulu tribe or North American Indian tribe had to use all their resources against the British and Americans respectively to try to survive. ...read more.

Governments were also responsible for contributing to the effects of that the civilian population felt with emergency legislation being passed to nationalise industries, establish new ministries, introduce conscription, to both the armed forces and industries such as mining, and rationing, and enforce such measures as the black out. These were all necessary for a government which was trying to fight a 'total war' because it needs to control the economy in order to mobilize all its resources to survive.10 During both wars the 'war industries' expanded substantially, however had the industrial revolution not occurred along with the accompanying population shift from rural to urban areas there would not have been the manpower to build and then work in the new factories. Perhaps one of the reasons that contributed to France's poor showing in both wars was the fact until 1948 less than 50% of her population lived in urban areas so she was never able to mobilize her population completely and so she would not have been able to have fought a 'total war'.11 The same principle could apply to all states before the industrial revolution, so was 'total war' only possible in the industrial age, and it took until the twentieth century for the concept to be fully realised. So far we have seen that society in the second half of the nineteenth century and the twentieth century have been more involved and affected to a greater extent by war as war has become more and more industrialised. However if we go back to the definition of 'total war' as being when the state mobilizes its whole population and resources in order to win the war, then we must ask ourselves if any state in the twentieth century did actually mobilize its whole population and all of its resources. If none did in the twentieth century, when it was for the first time possible for a state to do that, then it certainly would not be possible for the concept of 'total war' to be applied to any war earlier than the twentieth century. ...read more.

However, war on the bigger scale during the seventeenth century was not 'total' because a state did not mobilize all of its resources when it went to war. Even in the English Civil War not all the population was mobilized and an English peasant, 'when warned that the Battle of Marston Moor was about to be fought over his plot, was surprised to learn that the king and parliament had fallen out.'20 From what we have seen the concept of 'total war' cannot be usefully applied to any war earlier than the twentieth century, apart from localised siege warfare, because the states and combatants involved did not mobilize their whole populations and resources in order to wage war. The reason for this was that there simply was not the need, or the means, for a huge total mobilization because the wars were fought on a much smaller scale with smaller numbers fighting on a relatively small battlefield. It was only from nineteenth century onwards that wars started becoming 'more total' as the effects of the industrial revolution were transferred to the theatre of war. This meant larger armies, with more powerful weapons in all respects, and consequently a higher death rate. Therefore the demand for more soldiers and more arms to equip the soldiers increased. At the same time the significance and scale of naval and, eventually, air warfare was increasing exponentially. These demands all needed to be catered for, and in response the state governments went about conscripting people to the armed forces and in to the factories. However the notion that because the two major wars of the twentieth century have been termed 'world wars' everyone assumes that must mean 'total war' because of the global scale. This is not the case since even the Second World War, was not fought on all continents, and the majority of the First World War was fought in Europe. Finally one can argue that the emergence of 'total war' was just a natural progression of warfare, and that until warfare had industrialised 'total war' would not, and did not need to, be possible. ...read more.