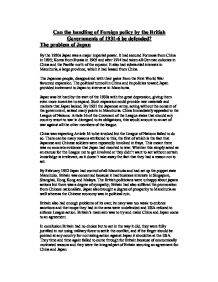 Can the handling of Foreign policy by the British Governments of 1931-6 be defended?

Can the handling of Foreign policy by the British Governments of 1931-6 be defended? The problem of Japan By the 1920s Japan was a major imperial power. It had secured Formosa from China in 1895; Korea from Russia in 1905 and after 1914 had taken all German colonies in China and the Pacific north of the equator. It also had substantial interests in Manchuria, a large province, which it had leased from China. The Japanese people, disappointed with their gains from the First World War favoured expansion. The political turmoil in China and its policies toward Japan provided incitement to Japan to intervene in Manchuria. ...read more.

China was expecting Article 16 to be invoked but the League of Nations failed to do so. There can be many reasons attributed to this, the first of which is the fact that Japanese and Chinese soldiers were repeatedly involved in frays. This meant there was no concrete evidence that Japan had resorted to war. Whether this simply acted as an excuse for the League not to get involved or they didn't want to act without certain knowledge is irrelevant, as it doesn't take away the fact that they had a reason not to act. By February 1932 Japan had control of all Manchuria and had set up the puppet state Manchuko. ...read more.

Britain also had enough problems of its own; its navy was too weak to enforce sanctions and the troops they had in the area were undefended and USA refused to enforce League action. Britain's main aim was to try and make China and Japan come to an agreement. In conclusion Britain had no choice but to act in the way it did, they were fully justified in not using military force to settle the conflict, and if the finger should be pointed at any country for not taking action against Japan it should be at the USA. They time and time again failed to come through for Britain because of economically motivated reasons and they were the integral part of Britain securing an agreement for China and Japan. ...read more.