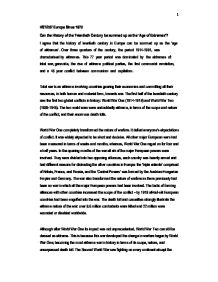 Can the History of the Twentieth Century be summed up as the 'Age of Extremes'?

HST/257 Europe Since 1870 Can the History of the Twentieth Century be summed up as the 'Age of Extremes'? I agree that the history of twentieth century in Europe can be summed up as the 'age of extremes' . Over three quarters of the century, the period 1914-1991, was characterised by extremes. This 77 year period was dominated by the extremes of: total war, genocide, the rise of extreme political parties, the first communist revolution, and a 45 year conflict between communism and capitalism. Total war is an extreme involving countries gearing their economies and committing all their resources, in both human and material form, towards war. The first half of the twentieth century saw the first two global conflicts in history: World War One (1914-1918) and World War Two (1939-1945). The two world wars were undoubtedly extreme, in terms of the scope and nature of the conflict, and their enormous death tolls. World War One completely transformed the nature of warfare. It defied everyone's expectations of conflict. It was widely expected to be short and decisive. All other major European wars had been measured in terms of weeks and months, whereas, World War One raged on for four and a half years. ...read more.

The twentieth century saw the first communist revolution. In Russia, the Bolsheviks, a group who believed that violent steps should be taken to force a communist revolution to occur, were led by Lenin. In 1917 two Russian revolutions occurred. In March the Russian people became increasingly discontented with the Tsar's inability to end Russian involvement in World War One, which they believed was responsible for the country's economic and social problems. This drove the people to start a revolution, which resulted in the abdication of Tsar Nicholas II. The provisional government established to fill this power vacuum also failed to address the severe problems in Russia. The people's anger at the ineffectiveness of this new government drove many people to support Lenin and the Bolsheviks; this mass support enabled the Bolsheviks to stage a successful coup d'etat. To consolidate his power Lenin established a totalitarian dictatorship. After his death in 1924, Lenin was succeeded by Stalin, who continued and developed Lenin's dictatorship to a more extreme level, until his own death in 1953. Fascism is a right-wing, nationalistic and authoritarian political ideology. ...read more.

However, I would argue that the nature and effects of the extremes are most important than their duration, and that it is necessary to look at how the extremes when placed together span a whole century. I also agree that some of the extremes were not phenomenon exclusive to the twentieth century. For example: wars had saturated history before the twentieth century, and there had been political extremes before 1900, such as: the French Revolution of the 18th century. However, the extreme elements of the twentieth century were more extreme than they had been in any other century: the heavily repressive regime of Hitler, for example, under which the Nazi ideology impacted every element of life, and the two main wars of the twentieth century (World Wars One and Two) involved more countries and killed more people than in any war in history. Some extremes, to a certain extent, were unique to the twentieth century; for example: the first communist revolution took place in this century. In conclusion, it is hard to dispute that a century which was characterised by political extremes, revolution, ideological conflict and genocide, and saw a majority of the world involved in two wars which had a combined death toll of over 60 million, can be summed up as the 'age of extremes'. Word count: 1,989 1 ...read more.