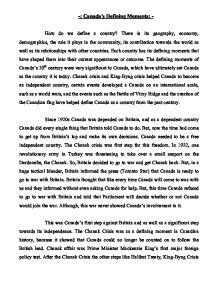 -: Canada's Defining Moments: - How do we define a country? There is its geography, economy, demographics, the role it plays in the community, its contribution towards the world as well as its relationships with other countries. Each country has its defining moments that have shaped them into their current appearances or outcome. The defining moments of Canada's 20th century were very significant to Canada, which have ultimately set Canada as the country it is today. Chanak crisis and King-Byng crisis helped Canada to become an independent country, certain events developed a Canada on an international scale, such as a world wars, and the events such as the Battle of Vimy Ridge and the creation of the Canadian flag have helped define Canada as a country from the past century. Since 1920s Canada was depended on Britain, and as a dependent country Canada did every single thing that Britain told Canada to do. But, now the time had come to get up from Britain's lap and make its own decisions. Canada needed to be a free independent country. The Chanak crisis was first step for this freedom. In 1922, one revolutionary army in Turkey was threatening to take over a small seaport on the Dardanelle, the Chanak. So, Britain decided to go to war and get Chanak back. But, in a huge tactical blunder, Britain informed the press (Toronto Star) ...read more.

The cost of this victory was very high. About 10 600 Canadians were killed or wounded. The memorial of Vimy Ridge was built in remembrance of Canadian soldiers. Another reason why this battle is one of the most significant battles in Canadian history is alliance group of Canadian division. For the first time in the Great War, all four Canadian divisions fought together for bravery and courage on the battlefield. And Canada's this courage and bravery brought about a fantastic victory, not only for the Canadian forces but also for all the allied cause. This was a significant step in the growth of Canadian pride and nationalism. Canada's this victory also gave independence to most of the Canadians and most of all Canadian troops. That's why the Vimy Ridge is known as a defining moment for the Canada. In World War I the Britain declared the war on Canada's behalf. But, for World War II, it was in Canada's hand to decide whether or not it will join the war, because Canada was an independent country now. Many Canadian were reluctant to be drawn into these world events again. So, Canada's Parliament decided to call a special session to debate on this issue. But, Prime Minister King and House of Commons decided to support Britain and to go to the war. As a result, King gave a powerful speech in favor of declaring war. ...read more.

The Senate passed the bill two days later, and the official declaration of the new Canadian flag by Queen Elizabeth II, occurred on February 15, 1965. The formation of the maple leaf in the new Canadian flag in 1965 was official identification for the Canadian Forces, other emblems, and it's contribution to the Canadian economy and culture. The creation of the new Canadian flag was a defining moment in Canadian history because it exhibited Canada as its own nation. It no longer had the union jack of Great Britain on it, which represented Canada's early years as a colony of Britain or a depended country. So, this maple leaf flag also exhibited Canada as an independent country. During the election of 1963, Lester B Pearson promised Canadians a flag of their own and they acquired the Canada's new flag. So, the defining moment in Canadian history is some event or some decisions, which shaped and helped Canada to form as a country. For Canada, these defining moments have characterized Canada from a dependent British colony to an autonomous country. Some of the event had also showed that how important contribution Canada could make to the world. In addition, these defining moments have further pushed Canada towards nationhood, which included mentioned above have guided Canada into doing just that. Canada also has been through many battles, very hard chosen decisions, and gone through many changes that have changed the way Canadians live today. Surely without these defining moments, the life of Canadians would certainly have been very different. ...read more.