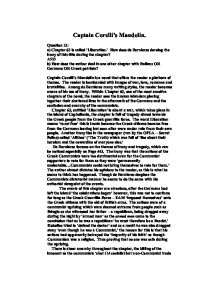 Captain Corelli's Mandolin - Chapter 63 is called 'Liberation.' How does de Bernieres develop the irony of this title during the chapter?

Captain Corelli's Mandolin. Question 13: a) Chapter 63 is called 'Liberation.' How does de Bernieres develop the irony of this title during the chapter? AND b) How does the author deal in one other chapter with Italians OR Germans OR Greek patriots? Captain Corelli's Mandolin is a novel that offers the reader a plethora of themes. The reader is bombarded with images of war, love, romance and brutalities. Among de Bernieres many writing styles, the reader becomes aware of his use of irony. Within Chapter 63, one of the most emotive chapters of the novel, the reader sees the broken islanders piecing together their shattered lives in the aftermath of the Germans and the confusion and anarchy of the communists. Chapter 63, entitled 'Liberation' is about a war, which takes place in the island of Cephallonia, the chapter is full of tragedy aimed towards the Greek people from the Greek guerrilla force. The word Liberation means 'to set free' this is ironic because the Greek citizens became free from the Germans leaving but soon after were under rule from their own people. Another irony lies in the newspaper (run by the OPLA - Secret Police) ...read more.

Arsenios dies knowing he has saved lives of others, he is burned on a stake giving an impression of a Saintly figure not dissimilar to Joan of Arc. Another life that war has effected is the life of Mandras. He enters 'Liberation' as an unknown person to Pelagia although she notices a resemblance between this man and what Drosoula looked like before the war. He too did not recognise this 'frightened skinny girl' until he heard her voice. Mandras' brutality towards Pelagia is ruthless as he makes her read out the last letter that she wrote to him when he was away on duty for Greece. Once he knew she has made up her own version of the letter he 'snatched it out of her hands' and read out the actual letter. Then in an act of misogynistic rage he punched and kicked at her before beginning to tear off her clothes. Soon enough Pelagia shot him with the derringer and it 'cracked through his collar-bone,' Drosoula entered Pelagia's room and found Mandras almost weeping in self-pity. He tortured Pelagia out of his own inadequacies as war had corrupted him. He is indoctrinated with Communist values and they are cruelly at odds with the gentle nature of Pelagia. ...read more.

Gunter Weber seems to the reader as the only German soldier with a conscience as he is portrayed in a better light than the others are. He lets Corelli live instead of shooting him when the Italian soldiers were gathered to be killed. De Bernieres has expanded this novel with many genres, irony, tragedy and comedy are vital towards the overall effect of the novel. Patriots of the other countries - Greece, Germany and Italy - have a major effect on the working of this novel by the ways in which they act towards each other and how they can each be contrasted with each other. However he fails to make clear of some important viewpoints which can be questioned by readers. The main focus point would be on the historical accounts he adds to the novel, he is distracted by making 'Captain Corelli's Mandolin' an eventful novel that he soon makes it historically false. This novel can be classed as an epic as it contains war, love and many other genres, which give it an epic feel. The blockbuster version of Captain Corelli's Mandolin lacks major parts of the novel, which are very important to the telling of this romantic war novel. ...read more.