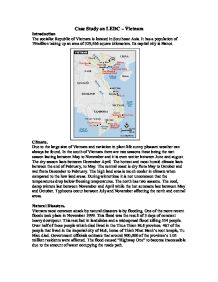 Case Study on LEDC - Vietnam Introduction The socialist Republic of Vietnam is located in Southeast Asia. It has a population of 79million taking up an area of 329,566 square kilometers. Its capital city is Hanoi. Climate. Due to the large size of Vietnam and variation in plant life sunny pleasant weather can always be found. In the south of Vietnam there are two seasons these being the wet season lasting between May to November and it is even wetter between June and august. The dry season lasts between December April. The hottest and most humid climate lasts between the end of February, to May. The central coast is dry from May to October and wet from December to February. ...read more.

Government officials estimate that around 900,000 of the province's 1.05 million residents were affected. The flood caused "Highway One" to become inaccessible due to the amount of water occupying the roads path. Relief. Due to the fact that Vietnams greatest advisory of natural disasters is floods this tells us that the relief of Vietnam is flat. This is true around the Phompenh area. The south and southeast part of Vietnam ranges from heaths of sea level to 200m above. However as one travels to the north Eastern parts of Vietnam one would find that the relief of the area is rather mountainous especially in places such as Dalat. Peek heights of this area range from 1000 - 2000 meters. ...read more.

These new towns have restrictions as to how they can be developed. These include: Building design must be approved Government programmes around area must be set out first Economic growth must first be taken into account Home ownership Land development Colonialism France moved into Vietnam in 1858 and captured Saigon in 1859. The French used south china (then known as Cochin China) as a base and moved from west to north taking over Vietnam and other countries. The French kept rule over Vietnam through the first and second world war. It wasn't until 1954 that Vietnam won back their independence by defeating the French at Dien Bien Phu and having a conference in Geneva. The French rule had a great impact on Vietnams growth. It mainly served as a farming country in the 1800s and later going into export of textiles and rubber to France. ...read more.