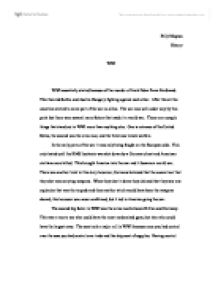 Billy Magnus History WWI WWI essentially started because of the murder of Arch Duke Franz Ferdinand. This then led Serbia and Austria Hungary fighting against each other. After this all the countries started to come part of the war as allies. The war was well under way by this point but there were several more factors that made it a world war. There are a couple things that stand out in WWI more than anything else. One is entrance of the United States, the second was the arms race, and the third was trench warfare. In the early parts of the war it was only being fought on the European side. ...read more.

Having control over the seas was a very powerful position to hold because once the war supplies are cut off any battle will come to a halt very shortly. This is why the counties were in such a rush to gain a huge navy. The other advantage of a country having a large navy is they can protect their water front form getting an attack. One of the modernizations in this era was submarines. This was a huge advancement because it made it much easier to sink bigger ships with bigger guns. Submarines could sneak under blockades and ger very close to shore without anyone noticing. The last part that made WWI so unique was trench warfare. ...read more.

Trench warfare was overall a very deadly and ineffective way of fighting. Many people were killed a day when on average only a half mile was gained. WWI was very famous for many new inventions including, submarines and planes. Trench warfare also played a huge part in this war and after the war was almost never seen again, it was proved extremely deadly and ineffective. In all WWI brought new ways of fighting and it was the first time the whole word was involved in a war at the same time. This is why so many things were invented because all of the counties got together to fight and learned about different modernizations. This is why many call it the Great War. ...read more.