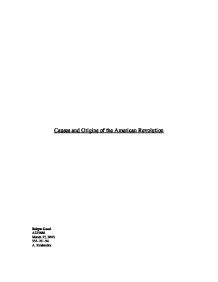 Causes and origins of the American revolution.

Causes and Origins of the American Revolution Robyn Good A223684 March 27, 2003. 333-101-94 A. Krishtalka In the seventeenth century a small group of distinguished British men landed on the land we now call the United States of America. They set up the first permanent English settlement in Virginia and it was the beginning of the English colonization of the 'New World'. Many came to settle in the new colonies such as, men looking to make an easy fortune; pilgrims; puritans looking for religious freedom and normal families looking for a new start. As a result, 13 colonies arose. In latter years these colonies started to desire independence from British control and they started a revolt for a cause they would finally win. However, this did not happen over night. There are many causes which led up to the revolution for example the neglecting of the colonies, control, economic, political and tax causes. There was a great amount of distance between the mother country and the 13 colonies. The Atlantic Ocean made communications difficult, which allowed the colonists to develop an independent spirit. For decades the colonies were allowed a great deal of freedom. In, 1660 England's relations with the colonies were only irregular and sporadic.1 In 1664 England tried control conditions in New England, however, this failed and supervision remained low. ...read more.

It was a tariff on sugar, molasses etc. However, the colonies never really followed the act instead they smuggled the items into the colonies. After, the new act was put into effect collectors were put into place so the shippers would have to pay the tariffs. The act confused Americans extremely.8 The Americans thought the new tax was put into place solely for revenue and not to regulate trade. They opposed the act. The first major tax that was put into affect was the Stamp (act) Tax in 1764. The purpose of the tax was to raise revenue. A tax was placed on legal documents and every document required a stamp. The reaction was bitter, violent and every level of society was in protest to it.9 The tax caused many riots with colonists. The reason the tax was imposed was just because of idea of being taxed. Colonists had no say in whether they should be taxed or not. After a great amount of protest from the Americans the British parliament insinuated that they could tax the colonies any way they liked at anytime. 10 The Americans infuriated protested the tax was unsound under English law and became even more furious. ...read more.

It raised the previous concern the colonists had of unknown future tax abuses. These act and taxes made the colonies feel that Britain was trying to deprive Americans their rights, privileges, and to take their money. This is one of the underlying causes of the revolution. Colonial resistance culminated, which resulted in the Boston Tea Party in 1773. Citizens disguised themselves as Indians and threw the tea into the bay. This incident stimulated more bad feelings between the colonists and the British Government which almost amounted into a fully flung revolution. Parliament responded with the intolerable acts. The Boston harbour was closed; they made American homes house British troops and more. As a result the colonies held the First Continental Congress, in 1774. They discussed how they could return the state back to the state they once knew. "Parliamentary acts were declared unconstitutional and taxes were not paid, an import-export ban was established, and Colonists were urged to arm themselves."17 This marks the start of the revolution. In 1776, the second Continental Congress chose to draft the Declaration of Independence. This soon led to independence of America, which marked the beginning of the United States of America. There were many origins and causes that made this revolution. The many taxes and tariffs imposed by the British was a major factor, the two different minds clashing (English - American) and much more. ...read more.