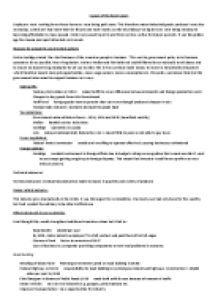 Causes of the boom years in the 1920s

﻿Causes of the boom years Employers were working fewer hours however were being paid more. This therefore meant industrial goods produced were also increasing. American?s had more time for leisure and more money so electrical labour-saving devices were being introduced becoming affordable by many people. Motor cars eased travel to and from work as well as for leisure pursuits. It was the golden age for cinema and sport attracted vast crowds. Reasons for prosperity: government policies Calvin Coolidge stated ?the chief business of the American people is business.? This was his government policy to let business operate as far as possible, free of regulation. Andrew Mellon and him believed wealth filtered down naturally to all classes and to ensure increased living standards for all was to allow the rich to continue make money to invest in industrial development which therefore meant more job opportunities, more wage earners, more consumption etc. ...read more.

It was the largest for commodities. Previously cars had only been for the wealthy but Ford wanted the ordinary to be able to afford one Effects of growth in car ownership: Ford thought this would strengthen traditional American values but it led to: Road deaths ï 20,000 per year By 1929, motor industry employed 7% of all workers and paid them 9% of all wages Closure of Ford ï factor to recession of 1927 Loss of business by companies providing components to Ford real problems in economy Road building: Breaking of laissez-faire ï federal government expend on road building in 1920s Federal Highway Act 1921 ï responsibility for road building to central government and highways. Construction = 10,000 miles per year by 1929 Chief Designer in Bureau of Public Roads 1936 ï roads built unfit for use because of amount of traffic Motor vehicles ï new service industries e.g. garages, petrol stations etc. ...read more.

demand: Growth in industrial production needed a continuous market in order to fuel the boom as people needed to be convinced to buy things frequently. An aspect of a campaign needed to be bought in which would differentiate between one’s product and that of the competitors to promote unique selling point. Advertising techniques worked for many consumers. Easy credit: Massive consumer boom was financed largely by easy credit facilities 1929 ï $7 billion goods were sold on credit – 75% of cars and half of major household appliances Availability of credit meant borrowers took on debts which they could not repay Influence in foreign countries: High tariffs were used to protect US markets however the government also encouraged businessmen to develop extensive interests abroad in terms of raw materials that fuelled technological developments. US exported vast amounts of manufactured products. In the 1920s with almost full employment, low inflation, high tariffs keeping foreign goods out of USA, benevolent government policies and a consumer boom the prosperity would go on forever. ...read more.