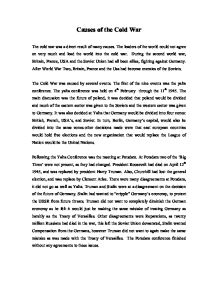 Causes of the Cold War

Causes of the Cold War The cold war was a direct result of many causes. The leaders of the world could not agree on very much and lead the world into the cold war. During the second world war, Britain, France, USA and the Soviet Union had all been allies, fighting against Germany. After World War Two, Britain, France and the Usa had become enemies of the Soviets. The Cold War was caused by several events. The first of the nine events was the yalta conference. The yalta conference was held on 4th February through the 11th 1945. The main discussion was the future of poland, it was decided that poland would be divided and much of the eastern sector was given to the Soviets and the western sector was given to Germany. It was also decided at Yalta that Germany would be divided into four zones: British, French, USA's, and Soviet. In turn, Berlin, Germany's capital, would also be divided into the same zones.other decisions made were that east european countries would hold free elections and the new organization that would replace the League of Nation would be the United Nations. ...read more.

In March 1946 Winston Churchill gave the Fulton Speech, which described Stalin's actions throughout Eastern Europe as an Iron curtain that had "descended over Europe." As Stalin gradually gained control over more and more countries, there was a border between the Capitialistic West and the Communistic East. He also says " The Communist parties have raised to power far beyond their number and are seeking everywhere to obtain totalitarian control" which is a blatant statement to the Soviets, saying that they are trying to achieve world domination. Stalin believed in order to achieve the protection of the Soviet Union, he had to gain poland and other terriories bordering East Germany. "The following circumsstances should not be forgotten. The Germans made their invaision of the USSR through Finland, Poland and Romania." Stalin is trying to prove that the protection of the soviet union depends on 'buffer zone' he has created, by using these countries. Stalin considered Churchill's speech a declaration of war. ...read more.

Following the initiation of Cominform, was the take over of Czechoslovakia. In the initial stages of the Marshall Plan the United States Congress did not want to fund the Marshall Aid Plan, but when Czechoslovakia was conquered by the Communists, it was was an alarm to them, as they were trying to 'Contain" Communism. Many Russian Historians blamed the Cold war on Winston Churchill and President Truman. They believed that Truman and Churchill wanted to "Destroy" the U.S.S.R, which was just protecting itself from attack. In turn, many weatern writers blamed the Soviets for the Cold War, and said that Stalin was "Trying to build up the Soviet empire". As time went on, many western historians began to blame the USA for the Cold War. They said "Truman had not understood how much Russia had suffered in the Second World War". Present day belief is that both sides were equally responsible for the Cold War. The historian Isaac Deutscher, Stalin (1969) says, "It is useless to try to discover who made the first move to break the alliance. It is impossible to trace the first broken promise." ...read more.