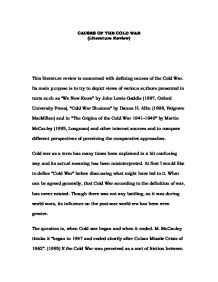 Causes of the Cold war.

CAUSES OF THE COLD WAR (Literature Review) This literature review is concerned with defining causes of the Cold War. Its main purpose is to try to depict views of various authors presented in texts such as "We Now Know" by John Lewis Gaddis (1997, Oxford University Press), "Cold War Illusions" by Danna H. Allin (1998, Palgrave MacMillan) and in "The Origins of the Cold War 1941-1949" by Martin McCauley (1995, Longman) and other internet sources and to compare different perspectives of perceiving the comparative approaches. Cold war as a term has many times been explained in a bit confusing way and its actual meaning has been misinterpreted. At first I would like to define "Cold War" before discussing what might have led to it. What can be agreed generally, that Cold War according to the definition of war, has never existed. ...read more.

Former great powers of the Axis, such as fascist Germany, Italy and Japan have been crucially destroyed, what, naturally, created a vacuum. Many foremost thinkers consider that it was this vacuum created after WW II, which has been assumingly the most important factor which started the race between US and USSR. The United States of America are considered as a capitalistically-oriented economy with its values of pluralistic free-market which come with it. USSR has been more pessimistic, free market, since Lenin got into power, has been considered as a method of destroying working class, communism was based on. According to this fact, the main cause of the Cold War seems to be clash of ideologies, what inevitably means clash of two great powers. Therefore, the world has changed from being multi-polar to being bi-polar. Both of these powers persisted in trying to prove its point that its system is the only worth fighting for, by attracting "vacuum states" to ...read more.

The topic raises an obvious question, whether it was inevitable to happen and whether the causes may be justified. I believe, as the history of each conflict tells us, the friction caused by an ideology which "justifies" our inability to tolerate different ways of thinking and living, the innermost want to dominate and to control, has got to be resolved. It could have been resolved by an open battle which would show us "who is stronger and more potent", though after nuclear war nobody would be alive or it can be resolved by long-term no-weapon war as the Cold War actually was. Since the human being developed nuclear weapon, which was the scariest and most influential method how to protect its own interests and how to satisfy them during Cold War, history changed. We cannot expect any more fighting in its real meaning as we could have seen before, the future of battling is in propaganda, espionage, information technology and in pressure, so it will be even quieter and even more dangerous. ...read more.