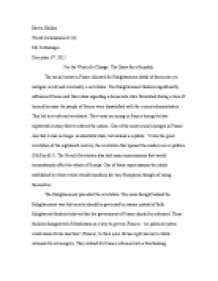 ﻿Raven Dhillon World Civilizations II (G) Ms. Schlesinger December 3rd, 2012 For the Want of a Change: The Quest for a Republic The social unrest in France allowed for Enlightenment ideals of democracy to instigate revolt and eventually, a revolution. The Enlightenment thinkers significantly influenced France and their ideas regarding a democratic state flourished during a time of turmoil because the people of France were dissatisfied with the current administration. This led to revolt and revolution. The events occurring in France during the late eighteenth century forever altered the nation. One of the most crucial changes in France was that it was no longer an absolutist state, but instead a republic. ?it was the great revolution of the eighteenth century, the revolution that opened the modern era in politics (McKay 615). The French Revolution also had many repercussions that would tremendously affect the whole of Europe. One of these repercussions the ideals established by these events would transform the way Europeans thought of ruling themselves. The Enlightenment preceded the revolution. The main thought behind the Enlightenment was that society should be governed by reason instead of faith. ...read more.

?it was becoming increasingly difficult to distinguish clearly between the nobility and the bourgeoisie? (France). The bourgeoisie were similar to the nobility in wealth and influence expect for the fact that they did not have the privileges that the nobility possessed and they were part of the Third Estate. The Third Estate had the most members because it included most of the population of France and it comprised of double the representatives of the first two estates; yet they still only had one vote (each Estate had one vote). The first two estates would always conspire to outvote the third estate. This rendered the Estates Assembly meaningless and the people of France who were not nobility were outraged at their lack of power (612). ?an emerging elite that included both aristocratic and bourgeois notables were frustrated by a bureaucratic monarchy that continued to claim the right to absolute power? (613). Even though there was tension between the classes, all of them were opposed to an absolutist monarchy. Naturally the dissent of the people could not be stifled. ?no monarch, however brilliant, could have met the rising liberal and nationalist expectations of tens of thousands of dissatisfied and vocal people, steeped in Enlightenment thought, who were committed to becoming the empowered citizens of a fraternal state? (France). ...read more.