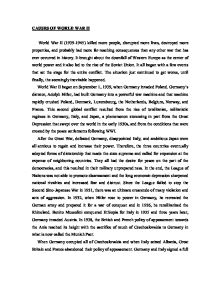 CAUSES OF WORLD WAR II World War II (1939-1945) killed more people, disrupted more lives, destroyed more properties, and probably had more far-reaching consequences than any other war that has ever occurred in history. It brought about the downfall of Western Europe as the center of world power and it also led to the rise of the Soviet Union. It all began with a few events that set the stage for the entire conflict. The situation just continued to get worse, until finally, the seemingly inevitable happened. World War II began on September 1, 1939, when Germany invaded Poland. Germany's dictator, Adolph Hitler, had built Germany into a powerful war machine and that machine rapidly crushed Poland, Denmark, Luxembourg, the Netherlands, Belgium, Norway, and France. ...read more.

In the end, the League of Nations was not able to promote disarmament and the long economic depression sharpened national rivalries and increased fear and distrust. Since the League failed to stop the Second Sino-Japanese War in 1931, there was an ultimate crescendo of treaty violation and acts of aggression. In 1932, when Hitler rose to power in Germany, he recreated the German army and prepared it for a war of conquest and in 1936, he remilitarized the Rhineland. Benito Mussolini conquered Ethiopia for Italy in 1935 and three years later, Germany invaded Austria. In 1938, the British and French policy of appeasement towards the Axis reached its height with the sacrifice of much of Czechoslovakia to Germany in what is now called the Munich Pact. ...read more.

Nations lost faith in the League of Nations as an international authority and many countries sought war as the only means to settle mutual disputes. The war ended when Germany surrendered on May 7, 1945 and Japan on September 2, 1945. Much of Europe and parts of Asia lay in ruins and millions of people were left starving and homeless. Europe's leadership in world affairs had ended and the United States and the Soviet Union had become the world's most powerful nations. Each of the vanquished countries was faced with humiliating peace treaties. Most countries of the world were left divided into two opposite blocs: the Capitalist and the Communist bloc. The war only proved how it was possible to wipe out the human race from the face of the earth. ...read more.