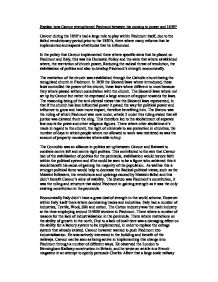 Explain how Cavour strengthened Piedmont between his coming to power and 1859? Cavour during the 1850's had a large role to play within Piedmont itself, due to the failed revolutionary period prior to the 1850's, there where many reforms that he implemented and aspects of attitudes that he influenced. In the policy that Cavour implemented there where specific aims that he placed on Piedmont and Italy, this was his Domestic Policy and the aims that where established where, the restriction of church power, Reducing the radical threat of revolution, the stabilisation of politics and also to develop Piedmont's strength economically. The restriction of the church was established through the Catholic church being the recognised church in Piedmont. In 1850 the Siccardi laws where introduced, these laws controlled the power of the church, these laws where different to most because they where passed without consultation with the church. The Siccardi laws where not set up by Cavour but rather he expressed a large amount of support towards the laws. The reasoning being of the anti-clerical views that the Siccardi laws represented, in that if the church has less influential power it paved the way for political power and influence to grow and have more impact, therefore benefiting him. ...read more.

There where restrictions on the ability of growth in the north, Due to a lack of coal there was a damaging effect on the ability for a factory system to be implemented, in order to replace the cottage system that already existed. Cavour however wanted to push Piedmont into industrialisation. He was actively interested in the building and benefit of the railways. Cavour can be seen as being active in implementing this change into Piedmont through a number of different ways. He observed the London to Birmingham Railway construction in Britain, and he wrote an article in a French magazine in an attempt to openly persuade Charles Albert that a large scale railway would greatly benefit Piedmont. Cavour was also actively changing his status of power, from 1850 he was appointed as Minister of Trade and Agriculture, which gave him additional responsibilities in shipping, this then changed in 1851, when Cavour was made Minister of Finance and he was given the responsibility of raising capital for large scale project, of which he hoped the railway would become, as a result of this power Cavour had the ability to make treaties, influence people, from a much higher standing than was previously available to him. ...read more.

It was assumed that this meeting was set up to ensure no further assassination attempts would be made. The basic idea behind Plombieres was that France would support Piedmont in the fight against Austria. However this was not agreed upon lightly, the terms of the agreement where the signing of the treaty. Savoy and Tuscany where to be controlled by the French, Italy received 200 000 French troops, Rome and Naples where to remain unaltered. However Cavour did not agree to every demand without thought, Napoleon wanted control of Nice, however this was not agreed until1859 due to the potential political impact. Cavour was particularly influential here to the power that Piedmont gained. It was through him that the treaty could be agreed and the support against Austria was established. Cavour greatly influenced the strength that Piedmont maintained, through his Reactionary method of politics and action, and also his ability to manipulate situations. However it can be said that Cavour changed his opinion on situations and event based on their consequence, if something had ended successfully Cavour publicised and expanded on this in a much greater way than he did if he supported something that was not directly beneficial to the increasing power, this was especially found when a plan was unsuccessful. Foreign Policy * Crimean war * Plombieres * National Society ...read more.